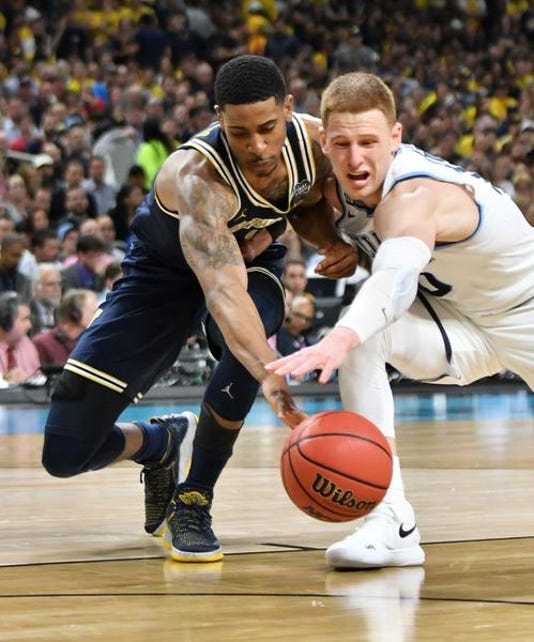 Ann Arbor — Saddi Washington took a second to quickly glance over his shoulder toward a tunnel at Crisler Center.

“We’re always waiting for Coach (John) Beilein to walk in here,” Washington said before Michigan’s practice on Thursday. “Shoot, he might walk in here now.”

That likely won’t be the case anytime soon as Beilein continues to recover from double bypass heart surgery he had this week at the University of Michigan’s Samuel and Jean Frankel Cardiovascular Center.

Instead, Washington, a third-year assistant coach, was in Day 4 of serving as interim head coach and leading the Wolverines as they continue to prepare for their upcoming 10-day trip to Spain.

But while Washington might be temporarily filling Beilein’s shoes, he noted he’s not trying to imitate Beilein. Instead, he’s trying to keep the program moving in the right direction while adding his own touch.

“I am not John Beilein. Nobody is. He’s the guru,” Washington said. “So, after being here going on three years now, I hope I’ve been able to absorb some of that greatness. Coach has a very definite blueprint that works.

“The secret in the sauce is there, but at the same time I got to be me in order for it to come out authentically. I understand what coach wants to get accomplished here, but then I got to put my special sauce on it so that I can uniquely deliver it — same message but maybe just a different delivery.”

Washington said Beilein has been “doing very well” in his initial phase of recovery. When asked if Beilein is still hospitalized or is back home, Washington said he and the program want to give his family privacy.

By all accounts, though, Beilein is expected to make a full recovery and be back with the team when preseason practice starts in late September.

“We knew last week, about a week ago, that it was something that was scheduled,” Washington said. “As always, Coach B does a great job of preparing us. He handed me a checklist of things from an administrative and basketball standpoint that we wanted to try to get done.”

Washington said after it was known that Beilein was OK and his surgery was successful, he was humbled to be handed the reins of the team. But at the same time, Washington doesn’t want to let his mentor down and said his primary focus has been making sure the program is running up to Beilein’s standards.

“Nothing is changing. The expectation is we got to do our job, but let’s all do it at higher level because that’s the way you honor someone of Coach Beilein’s stature,” Washington said. “We’re going to do our best to hand the program back in good order and hopefully a little bit better.”

Redshirt junior wing Charles Matthews said while everyone on the team wishes Beilein a speedy recovery, his absence isn’t a reason to slack off on the court. And even if it was, Washington wouldn’t let that happen because, like Beilein, he demands excellence from everyone.

“You think (about) the stuff that’s bigger than basketball,” Matthews said about learning of Beilein’s heart procedure. “I think it puts a lot of stuff in perspective and smacks you back to reality. We complain about this basketball stuff — that’s minor compared to surgery. Dealing with that, he’s such a great guy, a loving guy. He’s got a big heart. He’ll be all right.”

With that in mind, Washington and the Wolverines are forging ahead — with six practices remaining and three exhibition games awaiting in Spain — and figuring things out this summer until Beilein is able to return.

“(Beilein) is like that excellent CEO in terms of we have this model of embracing sudden change,” Washington said. “Whether it’s a plane crash or Moe Wagner getting injured and he’s out a couple of games, coach was the first one to say, ‘Hey man this is a great opportunity for our young players and our leaders to really step up and grow in some areas.’

“We have an excellent staff and we all try to be stars in our roles. I trust those guys to do their jobs and coach trusts us to hold down the fort, and that’s exactly what we’re going to do.”