What we learned at Ohio State, what’s next? 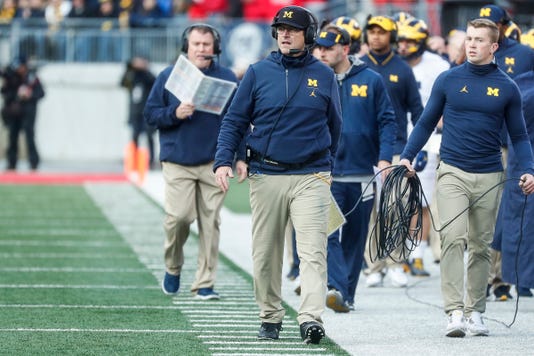 Looking back at what happened in Michigan’s loss at Ohio State in the regular-season finale and looking ahead what to watch as the Wolverines wait on their bowl assignment.

Michigan made progress this season. It’d be foolish to suggest otherwise considering the issues facing the program at the close of the 2017 season. But clearly not enough. The Wolverines were the second-best team in the Big Ten this season. But when they were put on a field with their biggest rival, they weren’t even close. Jim Harbaugh took a long, hard look at everything this program was doing after last season and made difficult decisions. That’ll probably be the case again this year after Michigan wraps up its bowl game.

Michigan’s touted pass defense faced its biggest challenge of the season Saturday and fell flat. The Wolverines had little hope in man coverage when Ohio State wanted to cross or put the ball in the air vertically. Michigan clearly over-estimated its ability to run with elite speed like Ohio State had and the defensive front did nothing to pressure Dwayne Haskins. Michigan’s defense was outstanding for 11 games. In game 12, it fell apart. 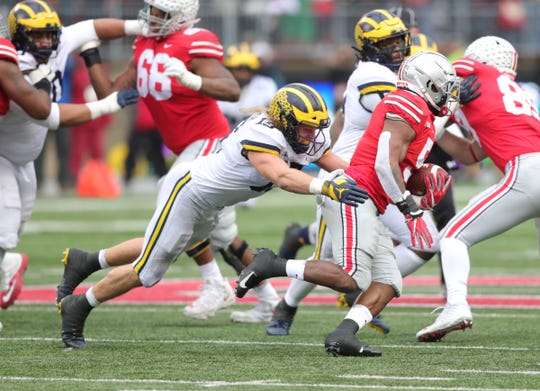 Everyone knew Ohio State’s speed would be something to contend with. But the Buckeyes’ offensive line play had not been great through 11 games this season. Michigan’s, meanwhile, had trended upward. That all changed Saturday. And perhaps the biggest surprise of all was the vanishing act from Michigan’s defensive line, as Haskins was barely touched in the pocket. Michigan’s ability to play man coverage is directly tied to its ability to rush the passer. When the latter goes, the former is incredibly difficult.

Michigan (10-2, 8-1) will now await its bowl assignment, which will be unveiled Dec. 2. The Wolverines could be in a New Year’s Six Bowl (Rose, Peach or Fiesta) for the second time in three years, depending on league title game outcomes.

Michigan had several players go down with injuries Saturday at Ohio State. Devin Bush Jr. and David Long both suffered hip injuries. Zach Gentry suffered a concussion. Shea Patterson had, per Jim Harbaugh, a bone contusion on his knee. Michigan has time to heal up,, but time will tell how many of those injuries linger. Especially with players who could have NFL decisions to make in the coming weeks.

If Ohio State ends up beating Northwestern and advancing to the College Football Playoff then Michigan’s likely headed to the Rose Bowl. If Ohio State doesn’t get to the playoff, it seems a likely landing spot would be as an at-large team in either the Peach Bowl or the Fiesta Bowl. A scenario that puts 10-2 Michigan in something other than a New Year’s Six game doesn’t seem likely right now, but isn’t impossible. If it’s the Rose Bowl, Washington could be an opponent. Florida, UCF, Washington State or LSU could be possible foes in another NY6 game.

As was the case last December, Michigan will spend most of the upcoming month putting as many finishing touches as possible on its 2019 recruiting class. This year’s early period runs from Dec. 19-21. Michigan currently has the No. 9-ranked recruiting class in the country, per 247sports composite. The Wolverines are still in pursuit of a few top-level targets. Zach Harrison, a 5-star defensive end from Ohio and the No. 5-ranked player in the country, is the top among them.