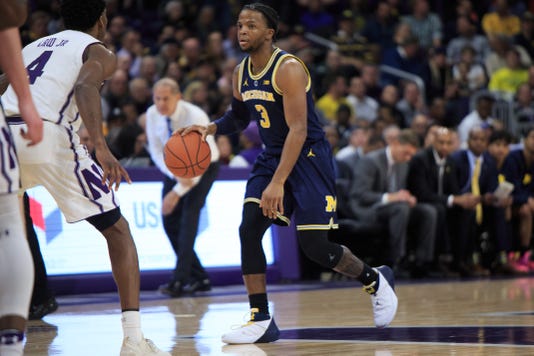 Michigan coach John Beilein knows a thing or two when it comes to 3-point shooting.

He also knows a bad shooter when he sees one and he’s adamant junior guard Zavier Simpson doesn’t fall under that category.

“I’m a shooting guy and I’ve coached some poor shooters and know when that ball goes out of their hand, it’s not going in,” Beilein said on WBBL’s Grand Rapids-based “The Huge Show” on Thursday. “And when the ball is coming out of Zavier’s hand right now, I think it’s going in. I’ve never seen so many in-and-outs in my life — I’m talking practice, games, shooting drills.”

In Tuesday’s win at Northwestern, Simpson had plenty of success attacking the basket in the first half. But when the Wildcats switched up their defensive game plan and turned him from a driver into a shooter, he had no success.

Simpson missed all five of his 3-point attempts in the second half, including three consecutive long-range shots over a 62-second span when Michigan held a 51-49 lead and Northwestern defenders sagged off him and dared him to shoot. It led to Beilein replacing Simpson with sophomore guard Eli Brooks down the stretch, and Brooks came through with a huge 3-pointer when Michigan’s offense was struggling to score.

After Tuesday’s performance, Simpson’s 3-point shooting dropped to 22.7 percent (5-for-22) this season and 27.2 percent (34-for-125) for his career. He hasn’t made a 3-pointer in the past five games — he didn’t attempt one against Providence or Chattanooga — and he has missed his last nine attempts.

Beilein said he’s turning to analytics and studying Simpson’s launch angle, with a focus on the back end of his shooting arc, to try and find out why his 3-point shots aren’t falling.

“Where is the high point of his arc? That’s what I’m looking at, and we’ll see if we can back it off and have the higher point be earlier so that it comes down at a different rate,” Beilein said. “There’s something happening. There’s just too many times it looks right on top of the rim like it’s going to go in and it doesn’t.”

Northwestern’s second-half strategy for Simpson was a first for Michigan this season. And while it might lead to future foes implementing a similar plan, Beilein likened the situation to Lakers point guard Rajon Rondo, a career 31.1-percent 3-point shooter.

Beilein said Rondo has never been known as a shooter during his 13 seasons in the NBA, but his teams find other ways to get him open and utilize him on offense, like being used as a ball screener.

With that in mind, Beilein said the best course of action, for now, is to press on with Simpson.

“We just keep working on his shooting. It’s the easiest thing rather than try and change everything,” Beilein said. “We got to have things in place, whether it’s substitutions…but right now we’re not giving up on that.”