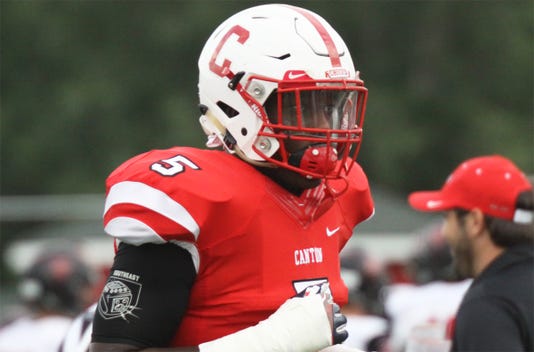 On Monday night, Michigan offered a scholarship to Canton senior Darius Robinson. This feels similar to last fall’s offers to in-state prospects Vincent Gray and Ben VanSumeren. The offer to Robinson was met with surprise by Michigan fans who see a class with several defensive linemen committed, and a handful of high-end blue chippers at the position still considering the Wolverines.

However, The Michigan Insider’s Sam Webb and Steve Lorenz both confirmed that the Michigan offer to the 6-foot-5, 265-pound Robinson was as a tight end.

“I think being 6-5 and growing closer to probably 6-6 and 265 pounds helps (as an offensive prospect),” Canton head coach Andy Lafata said. “It’s funny, this year, it goes to show you how the recruiting process works. Some guys in high school look at stats and look at numbers, but he caught one pass this year for 55 yards and that was his tight end highlight tape as far as a receiver goes. That helped him get recruited on that side of the ball, but it was brand new to him this year. He had to learn to get in an offensive stance and blocking low, driving his feet, and he picked up on it.”

Robinson played basketball at Canton Prep his first two years of high school before transferring to Canton High and picking up football. Last January, Toledo offered him a scholarship, his first for football. Less than a year later, he is now one of the top recruits in the state.

“Last year was an eye-opening experience for him,” Lafata said. “It was his first time ever playing football. I think he had played one year of little league football. He picked it up, but it was different for him. It didn’t come easy. This offseason, something clicked in him. It was a 180-degree change. He became a team leader, the kids voted him captain and he was a leader in the weight room. He was like a sponge soaking up football. He went from liking it to loving it. His leadership was huge.

“The kids looked up to him and it wasn’t that he was 6-foot-5 and a good player, it was that he was the kind of guy that was a team-first guy. It was an amazing transformation.”

Michigan saw Robinson at Grand Valley State’s Best of the Midwest camp last June. He was invited to a camp in Ann Arbor shortly after that, and he attended. After that, Robinson’s recruitment took off, but Michigan was not in heavy contact until recently. Lafata said the Wolverines were back in the school this week, which resulted in the offer.

Now, Robinson has to decide his next move. But recruiting is just as new to him as football is, so after initially setting earlier commitment dates, he has held off in order to make sure he is making the best decision he can make.

“For a lot of guys with stars by their name, it’s a three-year process, so he isn’t used to it or is as familiar with what this is,” Lafata said. “Darius showed up, was playing football this year for the first time in August, so it has been a whirlwind to him. He hasn’t had the same amount of time to feel out the process with schools, and it is a big decision for him, so he is taking his time with it. If you look at it, Colorado was one of his top schools, they brought him out, then they fire their head coach. So sometimes it’s OK to sit back and wait a little bit.”

The 247Sports Composite ranks Robinson as the No. 16 senior in the state of Michigan.

Michigan has joined the race for Indianapolis Ben Davis offensive tackle Dawand Jones, a 6-8, 360-pound senior who has been one of the fastest-rising recruits in the Midwest this fall.

He visited Michigan unofficially last Saturday. The Wolverines currently have one Ben Davis alum on their roster in running back Chris Evans.

The Wolverines are his second offer. Boston College was his first.

He took an unofficial visit to Michigan for their home game against Nebraska earlier in the fall and he also attended camps in Ann Arbor last summer.

Allen Trieu covers Midwest football recruiting for 247Sports. He has been featured on the Big Ten Network on its annual Signing Day Show. His Michigan and Michigan State recruiting columns appear weekly at detroitnews.com.