Michigan football bowl scenarios: Believe it or not, shot at Rose Bowl

Michigan football’s best bet for heading to Pasadena for the Rose Bowl is to.. gasp … root for Ohio State.

A link has been sent to your friend’s email address.

A link has been posted to your Facebook feed. 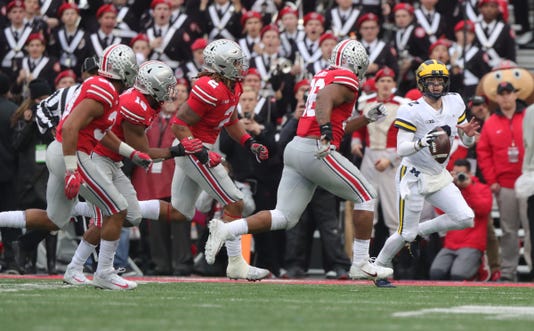 Michigan football‘s best bet for heading to Pasadena for the Rose Bowl is to… gasp … root for Ohio State.

A rout of Northwestern by the Buckeyes in Saturday’s Big Ten championship game, coupled with the beating OSU just put on U-M could boost the Buckeyes into the College Football Playoff, especially if a couple of the teams ahead of them fall.

If that happens, the Rose Bowl would get to choose between Northwestern and Michigan, and Wolverines fans probably feel pretty confident about their chances.

Of course, if OSU misses out on the CFP, they’d head to the Rose Bowl, and Michigan is likely looking at another New Year’s Six bowl or the Citrus Bowl, which is also on Jan. 1.

From The USA TODAY NETWORK

These sites are part of the USA TODAY NETWORK. Their content is produced independently from our newsrooms.