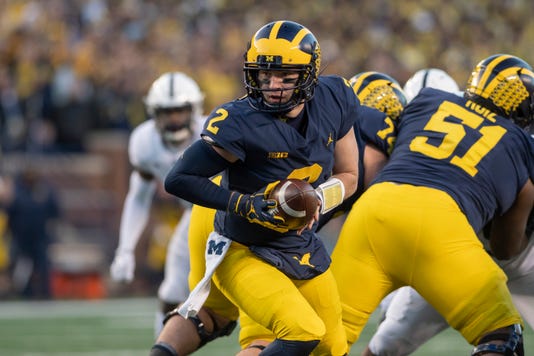 The way ESPN’s Todd McShay sees it, Michigan defensive end Rashan Gary is ready for the NFL, as is linebacker Devin Bush, Chase Winovich improved his stock by returning another year, and Shea Patterson will benefit from one more season under Jim Harbaugh’s tutelage.

Gary announced earlier this week his decision to forego his final year of eligibility to prepare for the NFL. Bush, named this week the Big Ten’s Defensive Player of the Year, has yet to announce his plans, although he said he will play in the bowl game.

McShay, a college football game-day reporter for ESPN and an NFL Draft analyst, shared with The Detroit News his thoughts on many of the Wolverines who have NFL aspirations. He said while the timing is right for Gary and Bush, Patterson would make himself more attractive to NFL teams with another year at Michigan. Patterson transferred to Michigan from Ole Miss last December and helped lead the Wolverines to a 10-2 record and a share of the Big Ten East Division title despite losing to Ohio State in the regular-season finale.

“He has the physical tools,” McShay said. “The best thing that Shea Patterson could do is to go back to school and continue to learn pro-style offense and continue to develop. He has the potential to develop into an NFL quarterback. If I were advising Shea, I would say it’s mandatory to go back to school for another year, because he has a great opportunity that not many quarterbacks in the country have, to work under multiple coaches — not just the head coach — that have spent many years in the NFL. There’s experience there.

As for Gary, McShay said he’s a sure first-round selection. McShay would not disagree with Gary’s decision to leave Michigan.

“Could he continue to develop? Absolutely, but I think he’s ready,” McShay said. “With a player of that talent and skill level, if you come back asking questions and wondering if you want to be back, you don’t want it to turn into (Houston’s) Ed Oliver. We’re just seeing more and more guys who try to put their feet back in but not totally in — maybe one foot back into the senior season. If you’re not there mentally, and you’re talented enough to be a first-round pick, which Rashan is, then I think the right decision is to go. Outside of running backs, I’m usually a proponent of go back and get as much experience as you can get, but Rashan’s ready.”’ 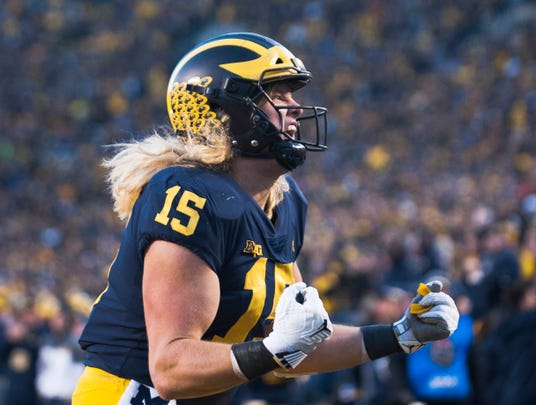 Gary missed three games this season while rehabbing an AC joint issue in his right shoulder. While Gary might not have had gaudy statistics in college, he often drew double teams, which would funnel big plays for Winovich and others.

“There are times this year where he looked like he was 100 percent and he was dominant,” McShay said. “And you can be dominant versus a double team …  and push the pocket and move the quarterback and get him to Chase or to somebody else, and not get any sack production or tackle for loss production, but that’s still a lot of production.

“He and Chase are very different players, but his ability to win with power translates to the NFL game really well. I’ve talked to scouts that think he might be a little overrated and don’t know if they would use a pick until later in the first round, and that’s fine. But I think the lowest you’re going to hear from anybody in the league who’s done their homework is early second round, and that’s just not going to happen.”

This time last year Winovich considered leaving early for the NFL Draft. He went to Florida for the bowl game with his bags packed to begin training in southern California for the draft. But he opted to return for his final season with the Wolverines.

He has seen benefits from another season in the college game.

“Chase is one of my favorite players in the country, and I only say that because I love watching players that everyone, including myself, just assumes is one thing and then you really dive into the tape, and he’s not that thing,” McShay said. “(ESPN’s) David Pollack talks about it all the time, like, ‘You know I was just a try-hard guy off the edge who had a great motor. I wasn’t an athlete, I wasn’t fast, but I was faster than everyone at the combine and I had better athletic numbers.’ I think Chase is going to be a lot like a David Pollack type. I think he’s going to really surprise a lot of people.” 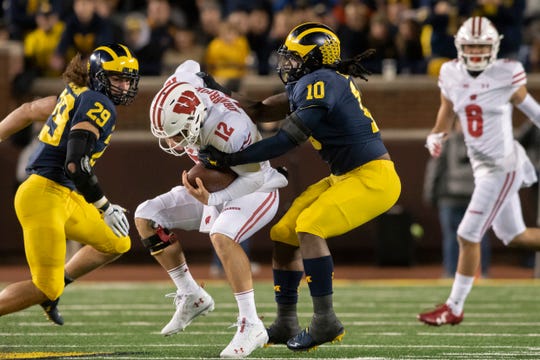 Entering this season McShay considered Winovich a fifth- or sixth-round pick. His opinion has drastically changed.

“I would gamble on this guy as early as the second round and no later than the third,” he said. “I think he’s a damn good football player, and I think he’s athletic, I think he’s quick, I think he’s explosive and for whatever reasons, I think those qualities are overlooked in his game.

“I spent 45 minutes with him so I don’t know him as well as someone who is going to invest millions of dollars in him should, but I feel I have a decent gauge, and I like the guy. I trust that he loves the game and he’s all in. Everything he does off the field, working with charities, you don’t necessarily draft a guy for that, but it does factor in. You want that you want those kind of guys around your organization.”

Winovich’s offseason work on his own and with first-year Michigan strength coach Ben Herbert helped him develop even more.

“He got better as a football player, and I talked to Don Brown about it, too,” McShay said. “He spent a lot of time in the offseason doing hand-to-hand combat to work on his hands. I asked him because watching the tape from a year ago and comparing to it what I had seen prior to our game when we covered them against Maryland, I thought he was a lot quicker with his hands and was more efficient.

“He was getting off the blocks and he was setting up offensive tackles, and they would work one way and he’d know it and (diffuse them). I think he’s more developed in terms of technique as a pass rusher than Rashan. Rashan has physical tools that nobody outside of (Ohio State’s Nick) Bosa really has in this class. But I think Chase is one of the more developed players in this class.”

McShay said his friends in the NFL wish he would stop discussing Winovich publicly.

“Every time I say something positive about Chase, there are friends of mine in the league who are like, ‘Shhhhhhh, would you cut it out? We’re trying to see if we can get him in the third,’” he said, laughing.

Discussing whether juniors should leave school early isn’t McShay’s favorite part of the job, but he knows with a player like Bush he has to. Bush was also voted Linebacker of the Year in the Big Ten and has led Michigan in tackles the last two years.

“I think he’s ready,” McShay said of Bush and the NFL. “There’s just a handful of guys I would say it’s time to go. He’s just so instinctive, he’s so fast, he’s today’s NFL game and everyone in the league knows it. He’s another guy, even more than Chase, that teams are hoping other teams won’t catch on to. He and Devin White from LSU — and everyone talks about Devin White to be a top-five, top-seven pick in the draft — I don’t see a big difference between the two, I really don’t.

“I don’t think they’re ready,” he said. “I think they’re both good players. Last year I thought Hill was a little bit better and this year Long has been a little bit better. They’re both third-, fourth-round prospects and their upside is to be a No. 2 corner in the league, but they’re probably No. 3s. If they come back and continue to develop — it’s a really good opportunity in that scheme with the amount of man-to-man coverage that they play. If you’re good enough, you’re going to excel. Now, you lose Chase, and you lose Rashan, now you’ve got a lot more pressure on you to hold up. I’m not giving advice either way, but both of them could use more seasoning.”

Running back Karan Higdon toyed with the idea of heading to the NFL after last season but returned and was voted a captain and rushed for more than 1,000 yards, despite missing one game with injury.

McShay sees a bright future for Higdon at the next level.

“He’s grown on me,” McShay said. “I think he’s probably a third-, fourth-round type back who’s going to be in a rotation. What he’s done this year, there aren’t a lot of players who have helped themselves as much as Karan did this year.”