Shea Patterson is heating up 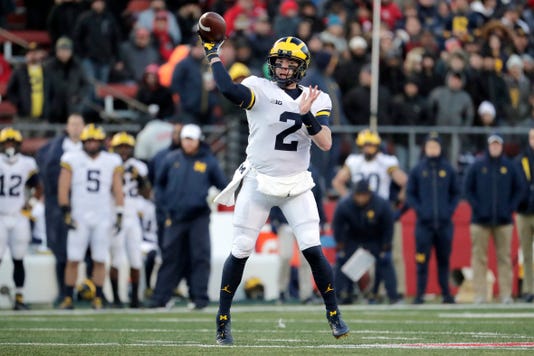 Shea Patterson looks to pass against Rutgers during the first half Saturday, in Piscataway, N.J.(Photo: Julio Cortez, AP)

Shea Patterson came to the Michigan Wolverines knowing his days of throwing the ball nearly 40 times per game were over.

In terms of pure volume, Patterson was never going to touch the type of counting stats he produced during an injury-shortened season at Ole Miss. That’s just not how Wolverines coach Jim Harbaugh runs his offense.

But Patterson entered a situation craving to prove himself as a more efficient passer — the ultimate hallmark of a Harbaugh offense, in any form, and a requirement for players at the next level.

Patterson is on pace to finish with one of the most efficient single-season performances by a quarterback in program history. His opportunities have been limited, but he’s making the most of them. He has the full range of ability to operate Harbaugh’s volumnus playbook.

Including the play below, which is an NFL throw.

Column: Shea Patterson has what it takes to challenge Alabama

Through 10 games, Patterson’s passer efficiency rating is 160.3. That would be No. 6 on the school’s all-time list. But based on modern football and other circumstances, a case could be made for something more.

Patterson, if the season ended today, would be the school’s all-time single-season completion percentage leader at 67 percent. He has thrown 17 touchdowns against three picks with 1,927 yards. His interception rate (1.3 percent) would be a Michigan record. His 8.5 yards per attempt is tied with Ohio State’s Dwayne Haskins for the Big Ten lead and tied for No. 11 nationally.

The efficiency numbers, which were a question mark for Patterson entering the season, have been outstanding. Plenty of credit goes to Harbaugh and assistant Pep Hamilton for that.

But most goes to Patterson, who continues to display the type of innate qualities that allow quarterbacks to get the most out of any play — regardless of surrounding circumstances.

Patterson’s pocket presence and overall feel is better than any quarterback Harbaugh has had here, and is as solid as any you’ll find in recent memory at Michigan. You’ll often hear coaches talk about the internal clock that has to operate inside a quarterback’s head, as he has to know how much time he realistically has before it’s time to revert to the creative part of the game without creating a negative play.

As Harbaugh explained Saturday, coaches can drill this all day long. But most of this is natural feel. Some quarterbacks never get it. Others do and wind up playing in the NFL for a long time.

Harbaugh would know, as this was perhaps his greatest strength as a player.

His timer was on the money all day. Stayed loaded and ready to throw, head/eyes up and alert. pic.twitter.com/nYN8VqfDxq

When Patterson leaves the pocket, he’s not doing it blindly.

He’s leaving with a plan.

In the above play, he’s able to find a seam to his left while keeping his head and eyes up, scanning the field. Harbaugh describes the process of checking reads as “changing the channel,” like flipping through TV stations with a clicker on your couch. Only you’re not on your couch, and you’re being chased by defenders who want to flatten you.

He’s feeling the rush and scanning the field, knowing his worst case scenario will be tossing the ball out of bounds. Donovan Peoples-Jones, the team’s most improved receiver, has been terrific at improvising with Patterson all season. He does so here for a third-down conversion.

This was Patterson’s most efficient passing day at Michigan and it might have been the best of his career, as he was dialed in with everything Michigan asked him to do. Rutgers is bad, sure. But some of these plays translate over to other defenses when you consider the accuracy into tight windows.

His play of the day was the scramble and touchdown throw to Oliver Martin. This was a two-man route that was originally supposed to go to Nick Eubanks, who was double covered. Patterson, again, changes the channel. But what separates him is his ability to buy time.

Shea Patterson’s play of the day.

Oliver Martin falls down on a 2-man route. Patterson, again, kept his eyes up and downfield while showing feel in the pocket to buy time for OM to get back up and run himself open again.

None of this stuff is taught. That’s all No. 2. pic.twitter.com/jQLOqQ2IEV

Martin falls down in the back of the end zone, but Patterson keeps himself alive, long enough for Martin to run open.

Touchdown. And Michigan’s greatest example this season of a quarterback making a play when there’s no play to be made.

More: Bo Schembechler would be proud of this Michigan team

5 things we learned vs. Rutgers Scarlet Knights
‘The Simpsons’ picks a side in Michigan-Ohio State rivalry