Michigan quarterback was asked if he has considered that this might be his final game at Michigan Stadium.
Angelique S. Chengelis, The Detroit News 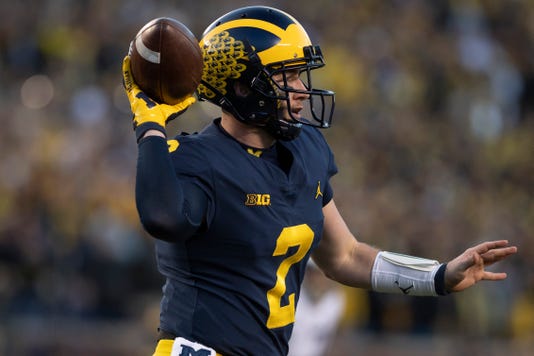 Ann Arbor — Michigan quarterback Shea Patterson has savored every part of his experience with the Wolverines since transferring here last December from Ole Miss.

He acclimated so quickly with his new teammates and has such an easy comfort with this program and its coaches, it seems he’s been here from his freshman year. Patterson has, as expected, been a difference-maker for the Wolverines and helped lead them to the No. 4 in the College Football Playoff rankings.

The Wolverines are 9-1, having won nine straight since dropping the season opener at Notre Dame, 24-17, and are atop the Big Ten East Division at 7-0. They face Indiana on Saturday at Michigan Stadium in the final regular-season home before traveling to Ohio State for the final game.

Approaching his last home game of the season at a stadium where he grew up watching games has given Patterson an opportunity to think about how far he has come since arriving here.

“It’s been everything and more of what I thought it was going to be,” Patterson said Tuesday night. “We all just kinda knew we were gonna be pretty good in spring ball and fall camp. Once things started rolling, after that first week, we got a wake-up call and ever since then we just attack every single day with maximum effort. I don’t think we’ve looked past since then so we’re feeling good about it.”

How focused is he on the every day approach? He wasn’t sure if Michigan is 8-1 right now or 9-1.

“I think we’re just taking it day by day and week by week and that’s the best thing we’ve got going for us is it doesn’t matter who we play,” he said. “Doesn’t matter which day it is, we’re giving it our all.”

Michigan quarterback Shea Patterson said his experience this year with the Wolverines has been “everything and more”
Angelique S. Chengelis, The Detroit News

Patterson is 16th nationally in completion percentage at 67 percent. He has thrown for 1,927 yards and has 17 touchdowns against three interceptions. Last season, Michigan had nine passing touchdowns.

He has another year of eligibility, but he’s not focused on what’s next in his career. He was asked Tuesday night if he has thought about whether this is his last game at Michigan Stadium.

“Actually, we’re focusing on Wednesday practice. We’re worried about Indiana, but we’re worried about tomorrow’s practice, and that’s how we’ve approached the whole season and I don’t think we’re going to change that.”

Michigan coach Jim Harbaugh said recently the first thing he noticed about Patterson was his intensity in practice.

“How focused he was,” Harbaugh said. “And seeing it day after day, I’m not surprised the improvement has taken place. He’s getting more comfortable playing in this system and been all good from the first day that he got here. Third-down pickups, it’s really giving our football team a big life on those third-and-6s, third-and-7s. Doing well on third-down conversions and that sets up another set of downs. He’s throwing the ball really accurately, too. Getting it places, taking care of the football great. Making the right decisions. Sees the field really well. Just all good. Been really good since the first day. Getting better.”

Patterson has said on multiple occasions that his knowledge of the game has grown incredibly since he arrived at Michigan and worked with Harbaugh and pass-game coordinator Pep Hamilton. He sees similarities between himself and Harbaugh, the former Michigan quarterback, as a player and competitor.

“His love and passion for the game is contagious,” Patterson said of Harbaugh. “Not only does it spread to me, it spreads throughout the whole team. He’s an easy guy to follow and definitely one you want to play for. I’m just proud to be a quarterback on his team.”

Harbaugh has tossed around various descriptions of his quarterbacks at Michigan the last few years, like being tough as a $2 steak. Patterson has toughness and more.

“There’s no question in my mind he brings a level of focus and toughness, mental toughness, a level of intensity to the position that few do,” Harbaugh said. “Upper percentile of guys that are able to do that and have the enthusiasm that he does and the energy that he does. We ask him to do something and he delivers, over and over again. A great feeling to have a quarterback like that.”

As Patterson continues to grow in the offense, there is a level of comfort enjoyed by the entire group.

“Just with repetition every single day, I think everybody on the team has gotten so much more in tune and more comfortable with what we’re doing,” Patterson said. “As the weeks go by and as the game prep enhances, I think everybody’s been on the same page so that makes it easier.”

He has grown with each rep since participating in spring practice.

“I don’t think I’ve changed a lot, but I’ve worked on a few things to make myself better,” he said. “I’m just doing what the coaches ask me to do. It’s a much easier offense to run when you’ve got incredible players around you and you’ve got an incredible defense to give you field position time after time after time and great special teams. I’m as comfortable as I’ve ever been.”