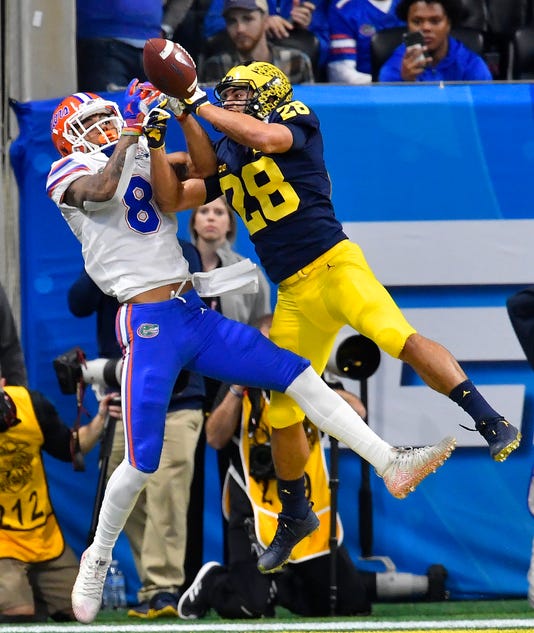 The unraveling has begun

Feleipe Franks’ throw on first down is complete to Trevon Grimes, but loses 2 yards. Franks’ throw on second down is incomplete, but he throws a strike to Josh Hammond on the next play for a 30-yard completion at the Michigan 35.

Injury: Michigan DB David Long was injured on the play and is being attended to by the training staff. He eventually walks off the field under his own power.

Jordan Scarlett rushes for 2 yards on first down. Scarlett then breaks about five tackles on his way to a 30-yard run that’ll make it first-and-goal from the 3-yard-line.

Scarlett gets 2 yards on a first-down carry. Franks keeps it for a quarterback sneak, and almost makes a costly error when trying to reach the ball across the goal line. He’s stopped short. On the next play, Franks pitches it to Scarlett for a 1-yard touchdown run.

Christian Turner is stuffed for no gain on a first-down carry. Shea Patterson’s second-down pass to Grant Perry is dropped with a Florida defender in tight coverage. Patterson is sacked on third down, and an uninspired Michigan offense will exit the field in less time than ESPN’s last commercial break.

Will Hart’s punt is fair caught at the 37.

Florida jumps ahead by two scores with Perine touchdown

Chase Winovich drops Lamical Perine for a loss of 3, and then does a nice little Gator chomp to get the people going. Van Jefferson hauls in an 8-yard reception on second down. Perine catches a pass on third down, but goes down a yard short of the line to gain. Florida will go for it from the Michigan 35.

The Gators call a jet sweep out of the timeout; Kadarius Toney hits the edge and reaches the Michigan 5 before stepping out-of-bounds.

Franks rolls to his left and throws the first-down pass out of the end zone. Franks hits Perine on a bubble screen, and Florida has taken a two-score lead.

Christian Turner rushes for 2 yards on first down. Shea Patterson hits Nico Collins for a 6-yard completion on second down, setting up third-and-2 in Florida territory. Patterson pulls it from Tru Wilson and picks up the first down with a 5-yard scramble.

Patterson takes a shot to Collins in double coverage, and his pass is picked off by Chauncey Gardner-Johnson. Gardner-Johnson returns it all the way to the Michigan 44 before stepping out-of-bounds.

Paye, Gil out; Michigan gets three-and-out to start half

Florida will get the ball at the 25 to start the second half.

Injury update: Michigan LB Devin Gil (hamstring) is unlikely to return to the game and DL Aidan Hutchinson has taken the place of the injured Kwity Paye to start the second half.

Tommy Townsend’s punt is returned by Donovan Peoples-Jones to the Michigan 48.

Conservative play-calling handcuffs Michigan before half

Shea Patterson throws a pass on second down that just misses the fingertips of a Florida defender and lands in the chest of Donovan Peoples-Jones and is complete for 14 yards.

Patterson goes back to Peoples-Jones on the next play for a 4-yard completion and Chris Evans picks up a first down with an 8-yard run up the middle.

Tarik Black reaches the Florida 45 with a 4-yard completion on first down. Evans is dropped in the backfield for a 1-yard loss on second down.

Nico Collins hauls in a 9-yard completion on third down, which moves the chains.

Patterson misses Grant Perry on first down. Tru Wilson rushes for a gain of 3 on first down. For some reason, Michigan continues to let the clock wind down before calling a timeout.

Patterson looks to take a shot on third down, but none of his receivers have any room to breathe, and his pass is defended.

Florida takes a knee to end the half.

Jake Moody’s kick goes through the back of the end zone. Florida will have it at the 25.

Feleipe Franks hits Van Jefferson on a slant route for a 7-yard pickup on first down. Franks keeps it on second down, gets a block and takes it all the way to the Michigan 38 with a 30-yard run.

Jordan Scarlett picks up 5 yards on a first-down carry. Franks’ throw on second down misses the mark, and it’s almost intercepted by Brandon Watson. Scarlett gets the carry on third down and he hits a hole on the left side before picking up 7 yards.

Franks is sacked for a loss of 9 yards on the next play. Franks escapes the pocket and gets to the right sideline for a 15-yard run on second down.

Injury: Linebacker Devin Gil was hurt on the play and is being attended to by the training staff.

Franks takes the quarterback draw 20 yards up the middle for a Florida touchdown.

Chris Evans takes the counter handoff to the right for a gain of 2 yards on first down. Shea Patterson is knocked down, rather easily, I might add, by Kyree Campbell for a sack that loses 6 yards. Patterson is stripped while attempting to get rid of a pass on third down; not a single Gator was aware that the ball was live, and Christian Turner is able to recover it and plow ahead for a 7-yard gain. Not enough for a first down, but it’ll make Jake Moody’s field goal attempt a little easier.

Moody’s kick from 48 yards out is good.

Lamical Perine gets 19 yards on a first-down carry and Florida moves just inside Michigan territory.

Perine’s run on the next play goes for just 2 yards. Feleipe Franks somehow avoids a sack, escapes the pocket, and picks up a few yards before stepping out-of-bounds. There’s a holding penalty, though, and it’ll be second-and-18. Franks’ completion to Kadarius Toney on second down goes for no gain. Franks throws deep to Toney on third down, but the throw just misses the mark. Florida is called for a false start in punt formation.

Michigan has it at the 25 after a touchback on the kickoff.

Shea Patterson completes a 5-yard pass to Donovan Peoples-Jones on first down, but that gain is quickly erased by a false start penalty calledo n Andrew Stueber. Tru Wilson catches a pass in the flat and is taken down after a gain of 1. Patterson scrambles and is dropped a yard short of the line to gain. Michigan will punt it away.

Will Hart’s punt bounces out-of-bounds at the 33.

Florida cuts into Michigan lead with another field goal

Florida will take over at the 25 after a touchback.

Feleipe Franks throws an Aaron Rodgers-esque rainbow Hail Mary to the middle of the field, where there’s somehow not a Wolverine defender in sight. Josh Hammond comes down with the pass, a 31-yard gain that’ll give Florida a first down at the Michigan 44.

Jordan Scarlett rushes for 3 yards on first down and Kadarius Toney picks up 6 more on the ground on second down. Franks dives ahead with a quarterback sneak that moves the chains on third down and ends the first quarter.

First-and-10 from the Michigan 34 when we come back.

Emory Jones is in at quarterback for Florida. He rushes for 4 yards on first down. Jordan Scarlett picks up 18 yards up the middle on second down, putting Florida at the 12-yard-line.

Jones takes the quarterback keeper for a 3-yard gain on second down, and Franks comes back in the game. He quickly dishes a screen pass to Scarlett with the pocket closing in, and the pass falls incomplete. Franks is stopped 2 yards short of the line to gain after picking up 5 on a quarterback draw.

McPherson’s 26-yard field goal try is through the uprights.

Michigan will take over at the 25 after a touchback.

Shea Patterson’s first-down throw to Nick Eubanks is incomplete, and his second-down throw to Grant Perry is wide of the intended target. His throw to Nico Collins on third down is on the money, though, and it’s good for a gain of 11.

Chris Evans rushes for 2 yards on first down. Patterson drops back and hits Collins with a back-shoulder throw that’s complete for a gain of 41 yards. Michigan has a first down at the Florida 21.

Feleipe Franks completes an 8-yard pass to Van Jefferson on first down and rushes for a gain of 9 on second down to give Florida a fresh set of downs at the 42.

Lamical Perine picks up a yard on the ground up the middle on the next play, and then hauls in a 6-yard pass in the left flat to set up third-and-3. Perine catches a tunnel screen and darts forward to the Michigan 44-yard-line with a 7-yard reception that’ll move the chains.

Franks drops a beauty over the shoulder of Jefferson with Tyree Kinnel trailing and for a 41-yard completion that’ll make it first-and-goal from the Michigan 3.

Franks is stopped on the ground for no gain on first down. Franks’ first read isn’t open, he’s forced from the pocket, and doesn’t see a wide-open receiver in the end zone before getting knocked out-of-bounds for a loss of 1. Brandon Watson makes a great play on a fade route in the corner of the end zone, and Michigan’s defense bounces back after allowing the big play.

Patterson sacked on third down in scoreless game

Michigan is flagged for a false start before it gets off its first play; it’ll now be first-and-12 from the 3.

Chris Evans gives the Michigan offense some breathing room with a 5-yard run up the middle on first down. Evans gets 3 more yards on second down, setting up third-and-4. Shea Patterson drops a floater complete to Zach Gentry for a 27-yard pickup that’ll give Michigan a new set of downs at the 38.

Christian Turner rushes for 1 yard on first down. Patterson’s second-down throw is thrown a tad behind tight end Sean McKeon, and McKeon can’t come down with the pass. Third-and-9 coming up. Florida brings a five-man rush; CJ Henderson shoots a gap and takes Patterson down with force for a loss of 5.

Will Hart’s punt is fair caught at the 25.

Feleipe Franks is pressured and forced to throw away the ball on first down. Jordan Scarlett is then dropped by Chase Winovich and Josh Ross in the backfield for a loss of 4 yards. Franks’ third-down throw misses the mark, and Florida will boot it away. But not before being moved back 5 yards for a false start.

Junior punter Tommy Townsend drops a beauty of a punt at the Michigan 5.

Michigan stopped on fourth down on opening drive

Florida has won the toss and will defer to the second half. Ronnie Bell receives the kick, bounces off a tackler and gets to the 32-yard-line, where Michigan will start its opening drive.

Shea Patterson fakes the give to Chris Evans and dashes to his left, reaching the Gator 47 with a 21-yard gain on the Wolverines’ first play from scrimmage.

Evans is stopped after a gain of 1 on first down. True freshman Christian Turner takes the jet sweep from Patterson, gets to the edge, and takes it all the way to the house. It appears he stepped out-of-bounds, however, and this will probably be overturned after a review.

It is overturned. Turner is ruled to have stepped out at the 38-yard-line, and it’ll be third-and-1.

Ben Mason is a few inches short of the line to gain on a fullback draw. Mason takes it again on fourth down but is completely stuffed at the line. They’ll bring the chains out to double check, but it looks like he came up short again.

Michigan goes for its first 11-win season in the Jim Harbaugh with a noon showdown against Florida in the Peach Bowl on Saturday. Nolan Bianchi of The Detroit News will provide live updates throughout the game.

Receiver Tarik Black ‘back in groove’ with Wolverines

View from the other side: Michigan vs. Florida in Peach Bowl