Michigan coach talks about going back out on the road for the first time in over a month and the challenges Illinois will pose in Thursday’s matchup.
James Hawkins, The Detroit News 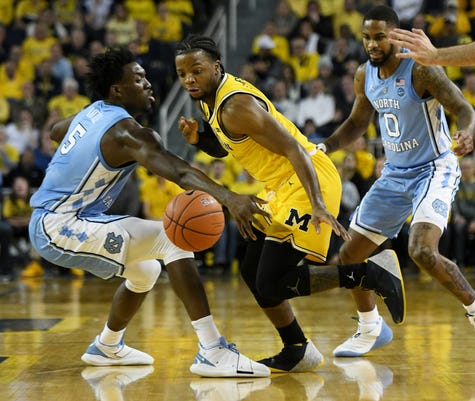 Ann Arbor — At the midway point of the regular season, the staggering numbers continue to pile up for Michigan.

Come Thursday, though, the No. 2 Wolverines can add a program record to their impressive resume by becoming just the third Michigan team to start the season with 16 consecutive wins.

“It’s a blessing to be 15-0 but at the same time we have to keep working because we can be 15-0 and we can lose the next five,” junior guard Zavier Simpson said Wednesday. “So, it’s important that we stay focused on our next opponent.”

And while Michigan (15-0, 4-0 Big Ten) might not feel any extra pressure being one of the country’s three unbeaten teams left standing entering play Wednesday, it will certainly feel plenty of it against Illinois.

The Fighting Illini rank tied for No. 11 in the nation in turnovers forced (17.9 per game) and have caused 11 opponents to cough the ball up at least 15 times, including Gonzaga, Georgetown, Xavier, Nebraska and Ohio State.

“Catching the ball, being strong with the ball, being able to dribble with your eyes up so you can see who is open … those are all things that are normal that you practice all through the year, but you’ve got to be ready to go into a fight (with Illinois). They’re not going to let you run things and you’ve got to be able to respond and go back to some of things that you either came into Michigan being able to do or have learned since you’ve been here.”

Simpson said the key to preparing for Illinois’ pressure defense is to stay disciplined and stay locked in, something Michigan has had no problem doing all season long. The Wolverines are committing just 9.2 turnovers per game, which ranks No. 3 in the nation.

Bob Wojnowski, James Hawkins and Matt Charboneau review the college basketball season at midseason for No. 2 Michigan and No. 6 Michigan State.
The Detroit News

Just as challenging as that is to not underestimate Illinois (4-11, 0-4) based on its record. The Fighting Illini have faced 11 high-major teams — five at neutral sites and four on the road — and have played their first four conference games away from home. Their first Big Ten home game was a neutral-site contest played at the United Center in Chicago, against Ohio State.

“We wouldn’t be undefeated if we played 11 high-major teams, some of the them on the road. Right now I don’t think we would be (unbeaten),” Beilein said. “They are not their record in any way, shape or form.

“If we aren’t mentally on in this game, we will not win. We have to be mentally ready to have the same ideas if we were playing anybody else in this league because they have both the plan, the talent, the whole thing to win a lot of games in the Big Ten.”

Unlike Illinois, though, Michigan has been able to rack up the wins and has proven it can sustain success.

According to Beilein, an example was set last season with former Wolverines Muhammad-Ali Abdur-Rahkman, Duncan Robinson and Moritz Wagner. Practices wouldn’t change following a big win because everyone understood the team had bigger goals.

A win is just a win and doesn’t mean anything until the next game.

“We’re pretty grounded in that area. We don’t talk about being undefeated. We just talk about, ‘Let’s have a great practice, let’s have another great practice and let’s go play the best we can,’” Beilein said. “We look at the future from a holistic point of view. We don’t look at the past that way. We just say, ‘What is the game? What do we have right now in front of us?’”

For Michigan, it’s a shot at tying a program record and hitting a mark that only two other teams before them have been able to reach.

Outlook: According to KenPom, Illinois is one of the youngest teams in the country and ranks No. 292 in the nation with an experience rank of 1.3 years…Michigan has won three straight in the series and 13 of the last 15 meetings between the teams…The Wolverines are one win away from tying the program record for best start to season set in 1985-86 and 2012-13.