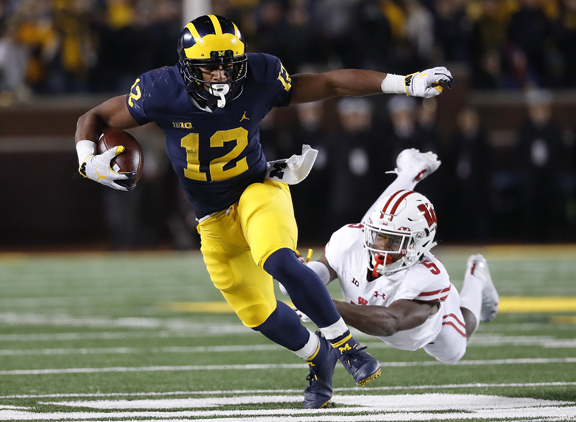 Michigan running back Chris Evans, left, shakes the tackle of Wisconsin cornerback Rachad Wildgoose on Oct. 13 in Ann Arbor. Evans may be the Wolverines’ leading running back for the Peach bowl on Saturday with Karan Higdon sitting out the game to avoid injury before this spring’s NFL draft. (AP photo)

ATLANTA — Michigan probably will need more than one running back to replace Karan Higdon in Saturday’s Peach Bowl against Florida.

The leadership void left by Higdon’s exit may be even more difficult to fill.

“Karan was our guy, our offensive leader, and we all kind of followed him,” quarterback Shea Patterson said Thursday of Higdon, the team’s leading rusher and offensive captain.

Higdon is one of No. 8 Michigan’s four draft-eligible players who chose to skip the Peach Bowl to begin preparations for the NFL draft. No players for No. 10 Florida have said they are bypassing the bowl game.

“It was definitely fun, a big honor to play with those guys,” Patterson said. “… We’re just focused on ourselves right now, and I think with our mindset, that we’re all we’ve got, we’re all we need. I don’t think there’s any other way to go about that.”

The good news for the Wolverines last week was Patterson’s confirmation that he’ll be back in 2019 for his senior season.

“I don’t know if it was a decision,” Patterson said. “I think it was just an announcement.”

Patterson, the Mississippi transfer, said he wants to enjoy another season at Michigan.

“I definitely just got a taste of it this year with my teammates and my coaches, and I couldn’t have been more happy to come back for one more,” he said.

The NFL decisions by the four Michigan players made the bowl game a 2019 audition for their replacements. Depth chart adjustments were necessary for Michigan (10-2).