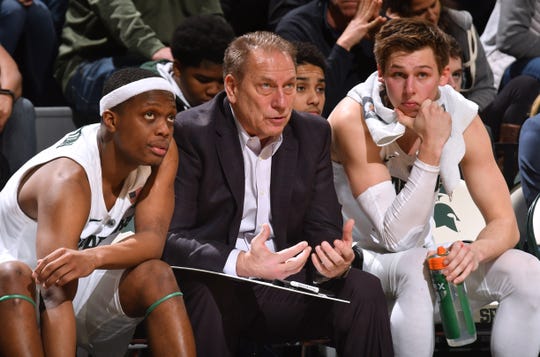 Cassius Winston, left, with coach Tom Izzo and Matt McQuaid says any team in the Big Ten can be beaten on any given night. (Photo: Dale G. Young, Detroit News)

East Lansing — If the past week or so has taught Michigan State anything, it’s that there are no easy nights in the Big Ten.

While the No. 6 Spartans have done well at avoiding any upsets — or come close, really — that hasn’t been the case around the conference.

This week, alone, Ohio State went on the road and lost to Rutgers while Minnesota, after getting a huge road victory last week over Wisconsin lost at home to Maryland, missing an opportunity to stay within a game of the conference leaders – Michigan and Michigan State.

And while the Wolverines remain unbeaten, they’ve been getting everyone’s best shot, making each victory well-earned.

It’s all on the Spartans’ minds as they prepare to head to Penn State to take on the Nittany Lions at 4:30 p.m. on Sunday.

“It’s the Big Ten and any team can lose on any given night,” Michigan State guard Cassius Winston said. “You gotta keep that in your mind as you move forward.”

Penn State (7-9, 0-5 Big Ten) offers an interesting challenge for the Spartans. Last season’s NIT champions entered the year with hopes of a top-half finish in the Big Ten and a spot in the NCAA Tournament. And, an early season win over Virginia Tech seemed to indicate the Nittany Lions were on that path.

However, they’ve won just three games since and are still looking for their first conference win despite playing Nebraska and Michigan close in their last two road games. It has been enough to grab Michigan State’s attention.

“What Penn State brings is an opportunity to see if we can go against a team that doesn’t have as good of a record and yet is well-coached,” Michigan State coach Tom Izzo said. “(Against) Indiana is a two-point game, Michigan is an eight-point game late. They played some teams well. They beat Virginia Tech, which is now a top-10 team.

“I’m not confused by the way basketball is but there’s been upsets all over and bigger upsets than Penn State beating Michigan State. So, I’m trying to take a business-like approach and see if we can get our team to play at level consistent with playing well no matter who we play.”

Michigan State (14-2, 5-0) will have to do so without guard Joshua Langford for the fourth straight game as the junior continues to sit out because of an ankle injury. His return remains uncertain but Izzo expects a clearer picture by next week.

“He got a little treatment, they said it will be a week or so and then they’ll take the boot off and we’ll have a better update I’d say by next Monday, Tuesday,” Izzo said.

Even though Michigan State hasn’t skipped a beat in Langford’s absence, that doesn’t mean the Spartans don’t miss him. The points per game has gone up and the Spartans’ defense has been better.

However, Izzo is confident Langford’s quick return is vital.

“It looks like on paper it’s true, but it’s not totally true because we’d be a much better team right now with Josh and I hope we get him back soon,” Izzo said. “Josh is a big loss offensively, he runs the lane so well, I don’t think we’re running very well but he defends so well, and he’s a threat to take those 3-point shots, which expands your offense a little bit, spaces it out.”

Langford’s absence is expected, but he might not be the only player the Spartans are without.

Junior Kyle Ahrens has started the last three games in Langford’s absence, but he’s been battling a bad back that Izzo believes Ahrens hurt on a dunk in last week’s win at Ohio State and aggravated after a fall in the Purdue game.

“That’s something I’ll keep an eye on because that would be two people at a similar position,” Izzo said.

While Ahrens hasn’t been ruled out, it likely means more minutes for freshmen Aaron Henry and Gabe Brown. Henry has been a regular part of the rotation, but Brown’s minutes have been sporadic. He played just less than four minutes against Purdue but hit his only 3-pointer in the first half.

“He does a good job knowing his spots, knowing his role and embracing his opportunity,” Winston said of Brown. “He’s a kid that is happy to be here, happy to come to work every day.”

Brown understands his playing time will depend on the health of his teammates, but he’s looking forward to whatever chance he gets.

“I’m sorry for the guys right now, I’d rather myself get hurt and them keep playing, but it’s an opportunity for the team to get better, not just me,” Brown said. “I feel like I’ve shown my 3-point ability and I think I think I can do other things out there but it’s dependent on the time I get. I’m grateful for the time I get but when I get out there I need to shoot the three, rebound and run.”

No. 6 Michigan State at Penn State

Outlook: Michigan State has lost just once in the last 10 meetings. That game was played two years ago at The Palestra in Philadelphia. … The last time MSU lost at the Bryce Jordan Center was in 2011. … The Nittany Lions are last in the Big Ten in scoring, averaging 67.9 points a game while MSU has the best field-goal percentage defense (.374). … Penn State junior Lamar Stevens is averaging 18.6 points a game, fourth-best in the Big Ten.