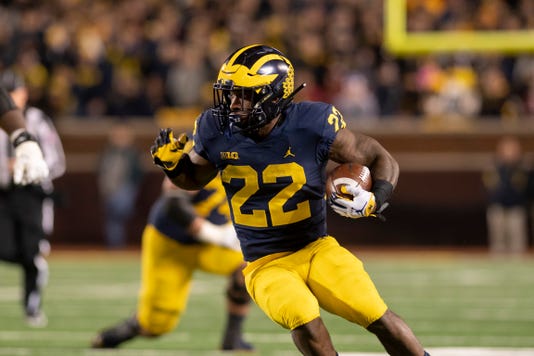 Michigan running back Karan Higdon will skip the Peach Bowl to focus on preparing for the NFL Draft.(Photo: David Guralnick, Detroit News)

Michigan will be without top running back Karan Higdon in the Peach Bowl.

Higdon, who rushed for 1,178 yards and 10 touchdowns this season and was a co-captain, announced his decision Thursday morning via Instagram, saying he will concentrate on preparing himself for the NFL Draft.

He is the third Michigan player to say he won’t play in the Peach Bowl on Dec. 29 against Florida.

Defensive end Rashan Gary announced two days after the regular-season finale he will not return for his final year of eligibility and linebacker Devin Bush, also a co-captain, on Wednesday announced he has not been medically cleared to play in the Dec. 29 bowl game because of a hip injury suffered in the Ohio State game and also has decided not to return for his final season of eligibility.

“These past four years has been nothing less than an unforgettable journey,” Higdon wrote. “I’ve come in as a young man with little knowledge and I know leave as a Michigan Man full of advice and wise words to share. I’ve battled many trials and tribulations while accomplishing many milestones and leaving my footprints at the University of Michigan.

“After a thorough evaluation between my parents and the UM staff we have deemed that it is in my best interest to not play in the Peach Bowl and to utilize this time to get prepared to pursue my dreams in the NFL.”

Higdon thanked the fans and his teammates.

“I love you boys and I thank you for supporting me in this decision,” he wrote. “Returning for my senior year was one of the best decisions of my life but now it’s time to complete the mission! Go Blue!”

After last season, he toyed with the idea of heading to the NFL and said had he reached 1,000 yards — he was six yards shy — he might have left early for the NFL. But he returned to Michigan and was voted a captain and rushed for more than 1,000 yards despite missing one game with injury.

ESPN’s NFL Draft analyst Todd McShay recently told The Detroit News he sees a bright future for Higdon at the next level.

“He’s grown on me,” McShay said. “I think he’s probably a third-, fourth-round type back who’s going to be in a rotation. What he’s done this year, there aren’t a lot of players who have helped themselves as much as Karan did this year.”

With Higdon out of the bowl, this likely means running back Chris Evans will take on more of the carries. The position group has thinned before the bowl, and not just with the Higdon departure.

O’Maury Samuels, who had been considered a back who would have received more reps during bowl practices, was dismissed from the team last week. He appeared in court last week facing one charge of domestic violence and one charge of malicious destruction of property, both misdemeanors. Kurt Taylor, a redshirt freshman, decided in November to leave the team to pursue a transfer.

Michigan has a good sense for what Tru Wilson gives the Wolverines in the run game, so Christian Turner could be one to watch during bowl practices.