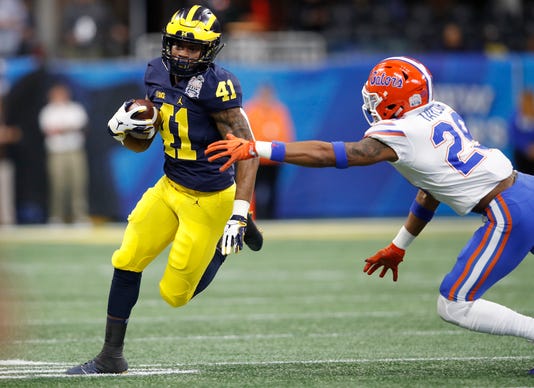 Michigan’s backfield was led by Christian Turner, who had 32 yards on seven carries. The team’s top running back Karan Higdon sat out Saturday’s Peach Bowl as he prepares for the NFL Draft.(Photo: Joe Robbins, Getty Images)

Atlanta — The Michigan players would not chalk up their Peach Bowl loss because four starters chose not to play in the game, but they do know the team missed their production.

Linebacker Devin Bush, the Big Ten Defensive Player of the Year, defensive end Rashan Gary, running back Karan Higdon and right tackle Juwann Bushell-Beatty, did not play. Bush, who led the team with 80 tackles and was an emotional leader and co-captain, Gary and Higdon, the team’s leading rusher who had 1,178 yards and 10 touchdowns, are preparing for the NFL Draft. Bushell-Beatty wasn’t fully healthy.

The defense also took injury hits during the 41-15 loss on Saturday in the first half when linebacker Devin Gil and defensive end Kwity Paye left the game with hamstring injuries. Cornerback David Long left the game in the fourth quarter with an injury.

UM QB Shea Patterson on how Michigan missed the players who sat out the bowl
Angelique S. Chengelis, The Detroit News

“We can say, ‘We’re all we’ve got, and we’re all we need,’ as much as we want, but are we a better team without Devin Bush and Rashan Gary and Karan Higdon and whoever else didn’t play?” quarterback Shea Patterson said. “No, we’re not. They’re a huge part of our team and our success this year, so missing them definitely did hurt.

“They’re doing, respectfully, what’s best for them. I couldn’t be happier for them and their decisions, but we’re going to take what we learned from this game and use it for next year.”

Fifth-year senior defensive end Chase Winovich requires surgery for an unspecified injury, but he chose to play the bowl game. He finished with seven tackles, and a team-high three tackles for loss. Winovich will now focus on preparations for the NFL Draft.

“You can make excuses for stuff,” Winovich said. “We had a lot of problems, a lot of things, obviously the players leaving that were impact players, even the last time we played Florida. Injuries galore. In warm-ups I strained my calf and my hamstring. I’m dealing with a cold and I’ve got to get surgery on something else.

“It’s kind of the way it went for the game. Kwity got hurt, Devin Gil got hurt. We had players that were starters that weren’t playing in the game. The excuses, you could go on and on. Like I said, I don’t know if that would have made a difference. They were a better team than us. Hat’s off to them.”

Winovich said not having the four starters was an issue.

“It hurt us and maybe guys took that in a negative light during the game,” he said. “I have to use one of those machines from ‘Black Mirror’ and look inside peoples’ brains to see how they were feeling.”

When Florida went up three touchdowns, Winovich said his mother was signaling him to take a seat and call it a college career.

“My mom was saying when we were down 20, pointing to the bench at a certain point you’ve got to start looking after yourself and for me it’s like, ‘I’ve never mailed it in in my life,’” Winovich said. “Like I’ll be damned if I’m about to give it to these guys and roll over and quit. For me personally it was important I felt like I came off the field and I didn’t have any regrets. I wanted to play until the last snap I could.”

UM guard Ben Bredeson on playing without the starters who sat out the bowl
Angelique S. Chengelis, The Detroit News

Left guard Ben Bredeson, who briefly considered his NFL options after this season, said no one can say for sure how their absences hurt the team.