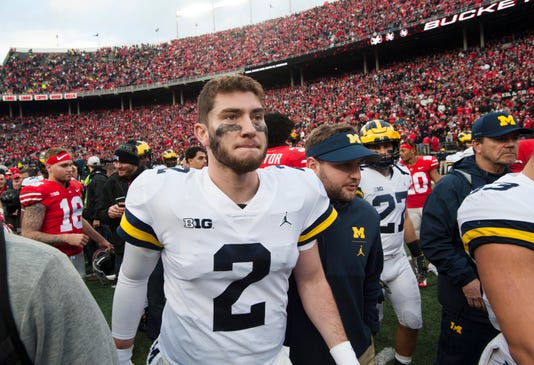 Michigan is in the process of moving on from its humiliating loss at Ohio State, but the Wolverines’ bowl destination very much hinges on what happens to the Buckeyes in the upcoming Big Ten championship game.

The Wolverines finished the regular season 10-2 and 8-1 with a share of the Big Ten East Division title. They were carved up 62-39 by the Buckeyes last Saturday at Ohio Stadium and lost their shot to play for the Big Ten championship and remain alive in the national playoff hunt. It was a defensive unraveling as Ohio State scored more points than Michigan’s previous five opponents combined against the Wolverines.

But 10-win Michigan, whose losses this season were at unbeaten Notre Dame in the opener and Ohio State (11-1, 8-1), remains an appealing bowl participant. The Wolverines dropped four spots in the AP and coaches’ poll to No. 8 and are not expected to be voted out of the New Year’s Six contention when the College Football Playoff rankings are released this week.

CBS Sports bowl expert Jerry Palm projects Michigan in the Rose Bowl, assuming Ohio State beats Northwestern (8-4, 8-1) in the Big Ten championship on Saturday and assuming the CFP committee places the Buckeyes in one of the four playoff slots. Michigan would be the next highest-ranked Big Ten team.

“It’s not that clear,” Palm said Sunday. “There’s a case for Oklahoma and honestly, if Georgia is at all competitive with Alabama (in the SEC title game), there’s a case for Georgia even with a second loss.”

If the Buckeyes beat Northwestern and don’t make the playoff, they will be headed to the Rose Bowl, according to Palm and the Wildcats would play in the Holiday Bowl more than likely. Michigan would still be in the New Year’s Six mix and possible destinations would be the Fiesta Bowl on New Year’s Day or the Peach Bowl on Dec. 29.

Palm doesn’t see a scenario where Michigan would play in the Citrus Bowl, because he believes the Wolverines remain in the New Year’s Six pool.

The Michigan players were at a loss after the beatdown by Ohio State, which scored 62 points on the nation’s top-rated defense. They said they will look to their four captains — seniors Tyree Kinnel and Karan Higdon and juniors Devin Bush and Ben Bredeson — for direction as they collect themselves before heading to work to prepare for the bowl game.

What they have to do is finish on a high note and win in the bowl.

“I look at it as I’ve got one more game left as a Michigan Wolverine,” Kinnel said. “As a leader, as a captain, I just want to get the team together and we’ve got to finish on top. I’m pretty sure we’ll be in a pretty good bowl game, and we can’t just down our heads these next three or four weeks.

“We’ve got to keep it together. There’s a lot of young guys on the team that’s going to need these three weeks. It would be great to go into the offseason with a big win. We haven’t done that in a couple years, either. Going to take this last game and try my best.”

Kinnel wondered if maybe the Wolverines started thinking too far ahead to the possibilities of fulfilling their lofty goals. Michigan coach Jim Harbaugh said his players were not overconfident heading into the annual rivalry game with Ohio State.

More: Wojo: Harbaugh, Wolverines should be embarrassed by this effort

More: Niyo: Lopsided loss sends Michigan back to the drawing board

But it’s easy to get caught looking ahead.

“Maybe we got a little too ahead of us. It’s just tough coming into this big of a game and wanting to win and reach our goals. It’s extremely tough.”

Michigan quarterback Shea Patterson talks about how the team must move forward after Saturday’s thrashing in Columbus.
Angelique S. Chengelis, The Detroit News

Quarterback Shea Patterson was 20-of-34 for 187 yards, three touchdowns and one interception against the Buckeyes and looked devastated after the game. He said he took “full responsibility” for all of the offensive issues.

Patterson distinguished himself as a leader this season for the Wolverines.

“We had a hell of a season,” he said. “The defense played lights out most of the season. Really proud of our guys. We had a really good run. We’re still going to move forward regardless of the outcome.