Bob Wojnowski, James Hawkins and Matt Charboneau review the college basketball season at midseason for No. 2 Michigan and No. 6 Michigan State.
The Detroit News 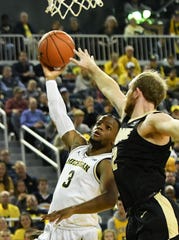 Ann Arbor — Mistakes and accidents have led to some of the greatest discoveries.

For starters, there’s Coca-Cola and potato chips, as well as Post-It notes and the microwave oven.

And then there’s Michigan junior guard Zavier Simpson, who stumbled across an old-school move during an open gym his freshman year that he’s turned into a thing of beauty — the running hook shot.

“I did it on accident,” Simpson said Wednesday, “and I knew it would be a good shot if I could perfect it.”

Since then, Simpson has spent the past two summers working on his skyhook — a smooth, sweeping motion of the arm in an upward arc — that has traditionally been used by towering post players and is rather uncommon for a 6-foot point guard.

Simpson started by practicing the shot from his right side while moving toward the rim. Once he got that down, he moved to his other hand and steadily progressed to making the hook shot from all over the arc area with both hands.

Yet, Simpson doesn’t aim for a particular spot on the backboard. As long as there’s enough arc on it, he’s confident it’ll drop.

“I don’t know how many hours I’ve put into it,” Simpson said. “It’s just more about the feel for it.”

According to Michigan coach John Beilein, the whole idea for Simpson to add the throwback move to his repertoire came about because of the jump wall, a defensive move where defenders are allowed to leave their feet and go straight up to contest a shot.

But due to his ability to knock down 18 shots in 20 seconds during the team’s double Mikan drill — a workout where a player has two balls and alternates putting up hook shots with each hand under the basket — Beilein felt the skyhook was worth exploring.

“He’s used to this movement and we just started to say, ‘You know what? This is a way that you can score by getting down that lane,’” Beilein said. “He’s going to find himself in that situation a lot where people will not get help, he beats his man slightly but not completely, and he’s got to be able to find a way to find leverage to score.”

While the more conventional method for point guards nowadays is the floater, Beilein noted it’s still hard to get that shot off over a 7-footer and sometimes it must be released so early just to have any chance of not being blocked. But with the hook shot, Simpson can shoot it late because he is able to get his shoulder into the defender and keep the ball away while getting to the basket.

A lot of it also boils down to comfort. Simpson said he feels it’s easier to make a hook shot running away from a defender as opposed to putting up a floater while being hip-checked.

Teammates have seen firsthand how much time and dedication Simpson has put into making a shot that has so many variables — touch, arc, distance and angle — look so effortless and easy on the run.

And some, like 7-foot-1 junior center Jon Teske and 6-10 redshirt sophomore center Austin Davis, have found out time and again just how hard it is to get a hand on Simpson’s running hook shot.

“You think you’re in the right spot and you think you’re going to beat him to the spot. You’re walling off and you’re not fouling him at all and then all of a sudden he kind of throws that on you,” said Teske, who ranks second in the Big Ten with 31 blocked shots.

“You’re not really expecting it. You’re kind of like, ‘What just happened? How’d that go in?’ He’s been really working on that. It’s something in the offseason he really wanted to get down and he’s been able to get that down.”

According to Bart Torvik, who operates a college basketball ratings and rankings website, Simpson is 7-for-10 on hook shot attempts this season. That’s tied for the third-best percentage in the Big Ten with Wisconsin forward Ethan Happ (21-for-30) behind Purdue center Matt Haarms (9-for-10) and Maryland forward Bruno Fernando (9-for-10).

Most notably, Simpson made a pair of his deft skyhooks last month against Northwestern — one over 6-8 center Dererk Pardon in the lane and the other over 6-7 forward A.J. Turner on a shot that kissed high off the glass.

He demoralized Indiana with three more hook shots last week. Two came on drives to the right side of the basket that lightly touched the backboard — one over 6-3 guard Devonte Green and the other over 6-8 forward Juwan Morgan. The third came while cutting across the lane from left to right and tickled nothing but nylon.

“A few big men came by and said something like, ‘That’s nice,’ or like, ‘That’s unstoppable,’” Simpson said. “A couple have said, ‘That’s lucky.’

“I feel like everybody who plays basketball has something special and unique that they do. Jordan (Poole) has the jab and step-back, that’s been a high-percentage shot for him. Charles (Matthews) has a good post-up game. Jon Teske has good hooks. So, everybody has something that may not be as normal but is unique and special to them.”

And, most of all, effective.

“It has really worked well for him,” Beilein said. “If he keeps shooting and getting a point per possession on that one, we’ll take that all the time.”