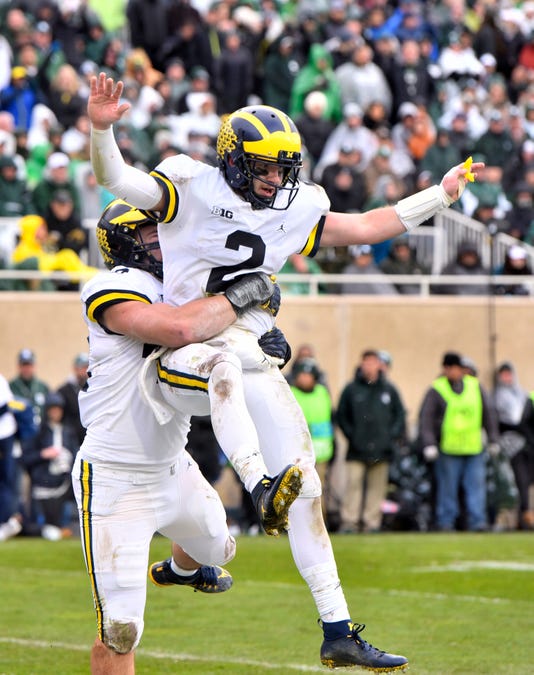 Angelique S. Chengelis: It’s Michigan coach Jim Harbaugh’s fourth season and this is his best team. The 2016 team nearly won one at Ohio Stadium, and the players who were on that team remember the disappointment. That’s not what this game will be about, though. Either you buy into the “Revenge Tour” or you don’t, but the Michigan players have embraced it. Dwayne Haskins is a lot for any team to handle, even the Wolverines’ top-rated defense. They have to get after him, which is no different than any other game plan against an opposing quarterback, but Haskins is unlike any QB Michigan has faced this season. Conversely, Ohio State will have to contend with Michigan quarterback Shea Patterson’s ability to run the offense efficiently, not to mention his ability to throw accurately and run when needed. Ohio State has won six straight in the series, but that streak will be snapped Saturday. Michigan, 24-14

Matt Charboneau: The Buckeyes have dominated the series and they have the benefit of playing at home. However, through 11 games, the Wolverines have been the better team. The question is whether Michigan can translate that into its first win in the series since 2011 and first in Columbus since 2000. The defense should be able to limit a potent Ohio State offense while the Wolverines’ offense could have a field day against an underperforming Buckeyes defense. It all adds up to a trip to Indy for the Wolverines. Michigan, 30-20

John Niyo: Michigan had the game plan to win a year ago. They just didn’t have the quarterback to pull off the upset. Now they’re favored in Columbus for the first time since 2004. And it’ll be up to Shea Patterson to keep the chains moving with his legs if the rain plays a factor like it did at Michigan State earlier this season. Michigan, 27-14

Bob Wojnowski: Based on defensive strength, offensive steadiness and deep motivation, the Wolverines have the advantage. Based on history, mental blocks and rivalry quirks, the Buckeyes are dangerous underdogs. Michigan’s defense has to stay aggressive and assert its dominance without giving up big pass plays to Dwayne Haskins. This game is why Shea Patterson is here, and why Jim Harbaugh needed him. Patterson will make clutch third-down runs and the defense will do the rest. Michigan, 34-24

Chengelis: ‘The Game’ will always be special for me and Pop