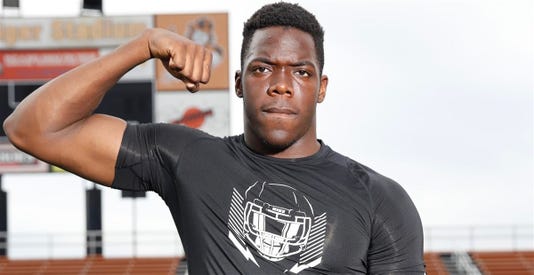 Urban Meyer’s retirement this week didn’t come as a massive shock to anyone who had been paying close attention.

But when one of the best recruiters in modern college football history walks away, everyone takes notice.

“I don’t know if it was originally planned or a change in plans,” says 247sports recruiting analyst Steve Lorenz. “But Jim Harbaugh was in Cincinnati the day after Meyer’s announcement recruiting two of the top 2020 guys in Ohio they’re after.”

Compared to where things were a year ago at this time, Michigan football‘s overall recruiting foundation appears to be trending upward. And given the news earlier this week that Meyer stepped down from his spot as U-M’s chief rival, the Wolverines now find themselves with possibly a large opportunity moving forward.

But Harbaugh’s program is still missing one final piece that could push Michigan’s recruiting efforts to Ohio State-levels of success under Meyer.

That, of course, is a win on the field over the Buckeyes.

Jeff Seidel: With Meyer out, U-M, MSU can win in recruiting

U-M’s 2019 class right now features 24 commitments, ranks No. 7 in the country, according to 247Sports, and No. 1 in the Big Ten — three spots ahead of where new coach Ryan Day’s No. 10-ranked Ohio State crop sits.

The early signing period is less than two weeks away, beginning Dec. 19, and the Wolverines are still fighting for some top targets on their board. Michigan appears to be in great shape with 4-star offensive lineman Trevor Keegan and still likes its chances with 5-star defensive end Zach Harrison, who played high school football a few miles north of Columbus in Lewis Center, Ohio.

U-M was in on a number of big-time targets late in the process last winter. It missed on nearly every one of them.

But a higher win total and a more aggressive coaching staff may change that heading into this year’s final stretch.

“That’s been night and day, with three home run hires from a recruiting standpoint,” Lorenz says. “The biggest surprise has been Ed Warinner. When he got hired, maybe you’d say he was a good recruiter, but not great. But Michigan’s been notorious for whiffing on its top offensive line recruits late the last few years. Now it looks like they’re closing on Trevor Keegan and have a great start in 2020.

“Sherrone Moore already reeled in his big fish with (5-star safety) Daxton Hill, a race Michigan almost never wins. Al Washington has Michigan on the verge of beating Ohio State for a 5-star (Harrison) in the backyard of Columbus.”

Keegan and Harrison aren’t the only players left on U-M’s list, though. Kalen DeLoach, a 4-star Florida State commit, is a player the Wolverines are pushing hard for right now. Four-star receivers Cornelius Johnson (6-foot-3, 195 pounds) and Jaylen Ellis (6-0, 180 pounds) are both getting the full push. Quavaris Crouch, a 5-star linebacker/running back, has been considered a Clemson lean for some time, but Michigan hasn’t given up hope.

Either way, the class —which also features top 50 pledges in running back Zach Charbonnet and defensive lineman Chris Hinton — looks more like Harbaugh’s 2016 and 2017 groups than last year’s 20-man crop that wound up ranked No. 22 nationally.

Michigan is in a better place.

But there’s still one obvious hurdle. 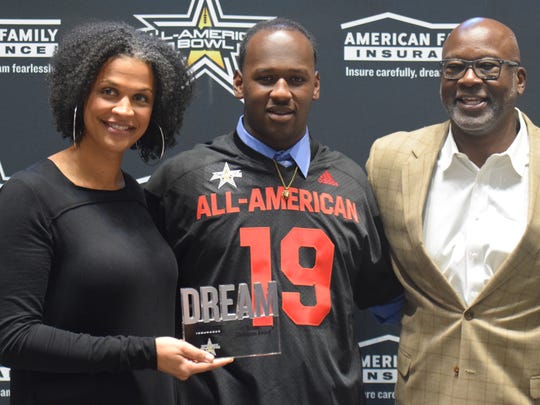 “The expectation, like I told Ryan Day, here at Ohio State is to win every game,” Meyer said Tuesday. “Win every game, graduate. … (have) every player stay out of trouble and every player (should) be a high draft pick.

The Wolverines and Buckeyes recruit some of the same targets each year, though not as many as one might think. Under Meyer, Ohio State put together classes that consistently rivaled only by Nick Saban and Alabama.

Five of Meyer’s first six classes at Ohio State finished in the top five. The outlier ranked No. 7. This created an undeniable talent gap, as Michigan had two top-five classes in that stretch — with one that ranked No. 37, another at 22 and last year’s at No. 20.

Few doubt Ohio State’s ability to finish strong with what it has in 2019. But what Day, a first-year coach at one of college football’s biggest programs, does next is unknown.

This is where opportunity lives for U-M. 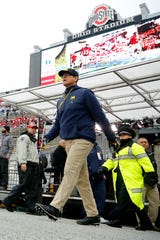 “This is a huge opportunity for Michigan in every single way,” Lorenz says. “Even if they’re not going head-to-head for 12 recruits every year, if they can win that game and push that national visibility with a playoff appearance and a Big Ten title with the rest of their package, it’d be big.”

But they have to win that game. Everything, again, comes back to how things go on the field against Ohio State.

Day will inherit a ton of talent next season, even if he doesn’t have star quarterback Dwayne Haskins. Lorenz points out that another Big Ten title for Ohio State in 2019 would go a long way toward Day’s ability to keep plenty of the Buckeyes’ recruiting momentum going.

But Meyer was known for his ability to bring top-ranked players into his office so they could try on all three of his national title rings.

Day can coach, no doubt. Ohio State director of player personnel Mark Pantoni is as good as it gets. But there’s only one Meyer.

“This recruiting gig, all laser lights have to be on that,” Meyer said Tuesday in Columbus shortly after telling Day he needed to be in four states the following day. “100 percent.” 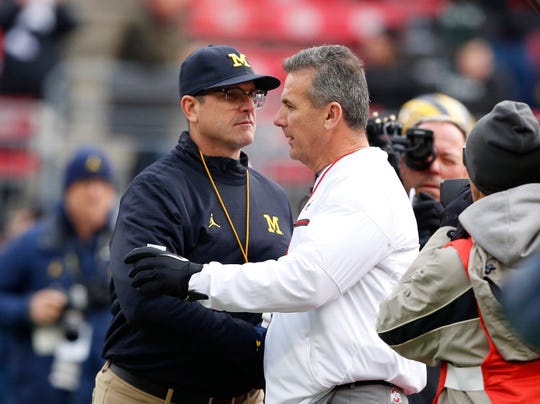 Michigan has put 16 players in the draft in Harbaugh’s first three years. He’s won 75 percent of his games. U-M has academics and spring trips and everything else the school has to offer.

Now, though, it has to beat Ohio State.

And if it can, Michigan’s recruiting could truly soar.

“Pros and rings. Michigan has one, they don’t have the other,” Lorenz says. “If they can get both, the sky’s the limit for them on the recruiting trail.”