Michigan football heads to Peach Bowl with future in view 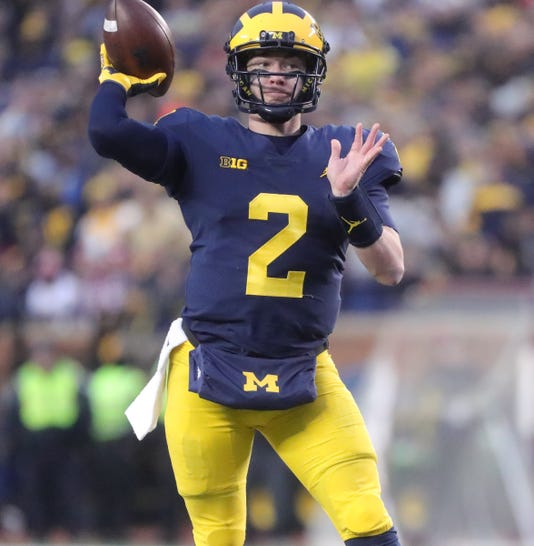 Something old and something new.

Michigan’s trip to the Peach Bowl this week will put the final touch on the 2018 season and be remembered as part of this team’s ultimate story.

On Saturday in Atlanta, the Wolverines will close the 2018 season with a tilt against Florida at Mercedes-Benz Stadium. But it will also get a partial look at what’s around the corner.

“(Getting to 11 wins) would be huge,” Michigan coach Jim Harbaugh said on his radio show this week. “That’s most of what we think about. We’ve had good practices, we’re prepared for it and we’re going to let it rip.

“I love the way our team’s been practicing. Can’t wait to play that football game.”

Michigan (10-2) opens the week as the favorite in this game, even if it’ll be playing without three of its top players.

Junior defensive end Rashan Gary declared for the NFL draft just two days after the Wolverines’ hopes at a Big Ten title and College Football Playoff bid went up in smoke during a 62-39 dismantling at Ohio State.

He’s not playing in the Peach Bowl.

On Wednesday, citing a hip injury that kept him from finishing the Ohio State game, junior linebacker Devin Bush Jr. — a captain and the most important piece of Don Brown’s No. 1-ranked defense for the past two seasons — announced he, too, would be entering the NFL draft early. He’s not playing in the Peach Bowl either.

On Friday, senior captain running back Karan Higdon followed. He’s sitting out, too, as he and his family have deemed his pursuit of an NFL draft spot outweighs the risk of playing in one final game. 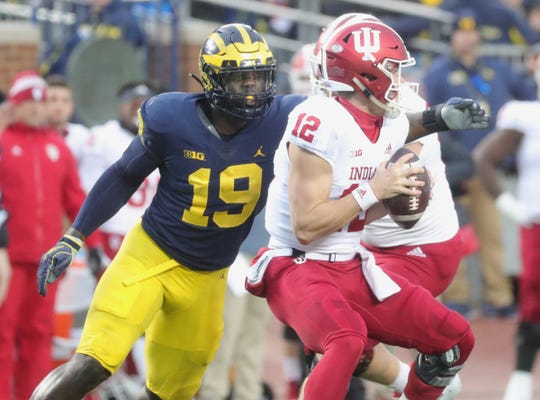 Plenty of people have shared opinions about all this. But when Michigan begins on-site work in Atlanta this week, it’ll be a talking point and little more.

This is one final opportunity for seniors, and perhaps some juniors, who have decided to play in their last game at Michigan. But as important, it’s one giant opportunity for those who are coming back — players who might have job interviews of their own.

“It’ll set the tone for next year, good or bad.”

With Higdon out, Michigan will likely lean more heavily on senior Chris Evans and junior Tru Wilson. But freshmen Christian Turner and Hassan Haskins both have massive opportunities to make an early run up the depth chart. They’ve had more reps throughout the month and that will continue leading into Saturday.

The competition for depth in Michigan’s running back room will ramp up in January when 4-star freshman Zach Charbonnet enrolls. But for the younger players currently working, this opportunity is massive.

Same goes for Michigan’s inside linebackers.

Sophomore Josh Ross played plenty this year, finishing with 50 tackles. But this could be an opportunity for him to take control of the massive void left by Bush entering 2019. And, with Bush out, reps for younger players like Jordan Anthony and former 5-star freshman Cameron McGrone only increase.

Michigan won’t have Gary or Aubrey Solomon this week. (The latter has transferred to Tennessee.) This will be Winovich’s last game. This means there’ll be plenty of opportunities to clain spots on Michigan’s defensive line.

Again, Michigan’s bringing in talented freshmen next year. For returning players, the Peach Bowl could be a chance to stake their claim early. We know what defensive ends Kwity Paye and Josh Uche (nine combined sacks) can do.

But here’s a chance for Aidan Hutchinson to get time against an SEC team, one year before he’ll be relied upon for heavy reps against everyone on Michigan’s schedule.

Shea Patterson’s coming back to school. He wants to beat Ohio State. But he also wants to show people he can be a high-round draft pick. He has one more season to prove that.

He has Saturday in Atlanta.

A win Saturday gets Michigan to 11-2, something Harbaugh’s stressed heavily this month. It won’t erase what happened in Columbus; nothing will. But winning the final game of the year does have a positive effect on how people feel about themselves when they’re forced to get back into the weight room early next month.

A loss sends Michigan into a critical offseason with more disappointment. The fan base will remain anxious either way, but it’s always worse after a loss. Especially when that loss has to linger for nine months.

Either way, though, this week’s about opportunity for many inside Michigan’s program.

This game’s value will, as always, live in the eye of the beholder.

But competition is never meaningless.