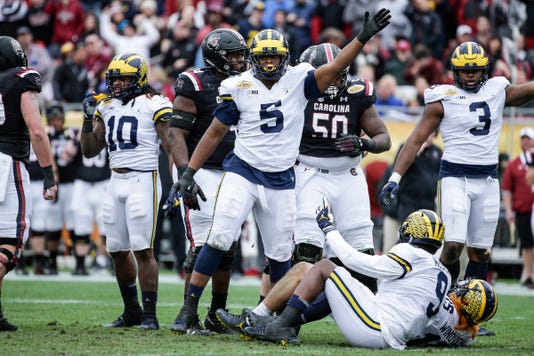 Defensive tackle Aubrey Solomon is transferring from Michigan football, per a report.

The 6-foot-3, 297-pounder from Georgia — a former 5-star recruit — leaves after two seasons in Ann Arbor, including an injury-shortened campaign in 2018. The news was first reported by Stadium Network’s Brett McMurphy.

Michigan spokesman Dave Ablauf did not immediately confirm the news. He later offered the following statement.

“Aubrey has permission to speak with other schools which gives him the opportunity to transfer or stay at Michigan,” he wrote.

Solomon played in all 13 games as a true freshman last season, totaling 18 tackles (two for loss) and appeared to have himself in a position to compete for a starting job entering the 2018 season.

Michigan football recruiting: What we know before early signing period

He began the season as a reserve defensive tackle, before suffering a leg injury that kept him out of action vs. Wisconsin on Oct. 13. Solomon missed a road game at Rutgers on Nov. 10 due to an illness, coach Jim Harbaugh said at the time.

He made four tackles against Indiana at home the following week but was not with the team for its regular-season finale at Ohio State on Nov. 24.

He finishes the 2018 season with six tackles.

Solomon signed with Michigan in 2017 as the No. 23-ranked player in the country, according to 247Sports. His recruiting process was an interesting one, as Solomon had originally committed to Michigan in June of 2016 before decommitting in August.

Michigan continued its pursuit of Solomon and eventually scored his commitment on National Signing Day.

Michigan’s depth at nose tackle for next season seems to have taken a sizable hit as well. The Wolverines are expected to bring back Carlo Kemp and Michael Dwumfour next season. Redshirt freshman Donovan Jeter moved inside this year but didn’t play much.

Beyond that, the Wolverines could be looking at freshmen inside — as 4-star prospects Chris Hinton and Mazi Smith are committed to the 2019 class.

More: Michigan not giving up on 5-star Daxton Hill after flip to Alabama

Listen to the latest episode of The Michigan Rant podcast