Michigan defense dominating with shades of ’97 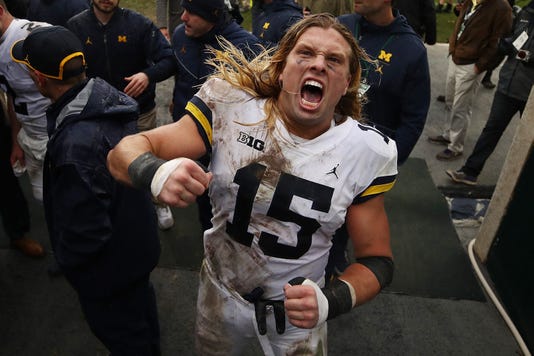 Looking at this year’s Michigan football schedule, everybody who plays, coaches, covers, or follows the team knew this season would be a tough run, maybe the toughest in the country.

Michigan’s schedule included five ranked teams – almost half the 12 games. Three of them would come in a row, in the middle of the season: Wisconsin, Michigan State, and Penn State. The players called that the gauntlet, until defensive end Chase Winovich renamed it, “The Revenge Tour,” because all three teams had beaten Michigan last year.

I thought if Michigan could win two of those three, that would be a success. But after the Wolverines whipped Wisconsin and beat rival Michigan State, they got greedy, and wanted to sweep all three.

They had plenty of incentive. Last year, Penn State had crushed Michigan 42-13, and tried to score again with two seconds left. The Wolverines remembered that, too.

This year the Wolverines took it to the Nittany Lions from start to finish, winning 42-7. The Wolverines didn’t merely dominate the Lions, they embarrassed them – and they had fun doing it.

Michigan’s defense is so talented, so well-coached, and so hungry, you can’t wait to see what they’ll do next. The last time I saw that was 21 years ago, in 1997, when Michigan won the national title behind a certain player named Charles Woodson, the only defensive player ever to win the Heisman Trophy.

The current defense can’t boast the same star power. No one on this team is going to win the Heisman Trophy. Michigan might not have a trophy winner at any position. But top to bottom, this defense might be better, with great players at every position playing in perfect synchronicity with each other. Even from 70 rows up you can tell these guys are dying to get back on the field and do it again. Perhaps that’s why they’re the nation’s top defense.

The defense has given the offense time to catch up – and it’s working. Last year, the Wolverines averaged only 11 points against Wisconsin, Michigan State, and Penn State. This year, they scored three times that.

For the first time in many years, the Wolverines are having a ball out there — at their opponents’ expense — and it’s contagious. When these Wolverines sack the quarterback or score a touchdown, they like to imitate the celebrations their opponents used on them the previous year. Even the public address operators are getting into the act, playing Wisconsin’s trademark “Jump Around” against the Badgers, and Penn State’s “Sweet Caroline” against the Nittany Lions.

The Wisconsin and Penn State games were both blowouts that ended long after dark, but the fans didn’t leave early to beat the traffic, instead sticking around until the very end to cheer their favorite team. They’re savoring their success, just like the players are.

Turns out revenge is a dish best served by the nation’s top defense.

Best-selling author John U. Bacon is a former Detroit News sports reporter. His website is JohnUBacon.com.