Michigan-Dearborn Wolverines hit 12 from deep in win over No. 13 Warriors 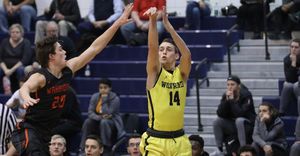 DEARBORN, Mich. – The University of Michigan-Dearborn men’s basketball team jumped out to a quick lead and pulled away for an upset win over nationally ranked Indiana Tech in a Wolverine-Hoosier Athletic Conference matchup Saturday at the UM-Dearborn Fieldhouse.

The Wolverines hit nine 3-pointers in the first half and cruised to an 84-69 win over the No. 13 Warriors to move to 5-13 overall and 3-6 in the WHAC. The victory pushes UM-Dearborn right back into the race for a WHAC postseason tournament bid as the league schedule nears the midway point.

UM-Dearborn took a 34-17 lead when Jared Jackson hit a 3-pointer with 7:16 to play in the first half, the eighth make from deep in the early going for the Wolverines. UM-Dearborn finished the first half up 43-29, going 9-of-12 from behind the arc.

Zach Lattimer scored the first six points of the second half to push UM-Dearborn in front by 20 and the Wolverines cruised to the win. Lattimer led the UM-Dearborn offense with 15 points, including four 3-pointers.

Jason Gigliotti recorded a double-double with 14 points and 12 rebounds, while Jalen Paul and Mafiaion Joyner each added 14 points. Cody Kegley hit a pair a 3-pointers early in the first half on his way to a 12-point night.

Indiana Tech was led by Dylan Phair with a game-high 24 points.

The Wolverines return to action against No. 10 Cornerstone University at 7:30 pm Wednesday at the UM-Dearborn Fieldhouse.