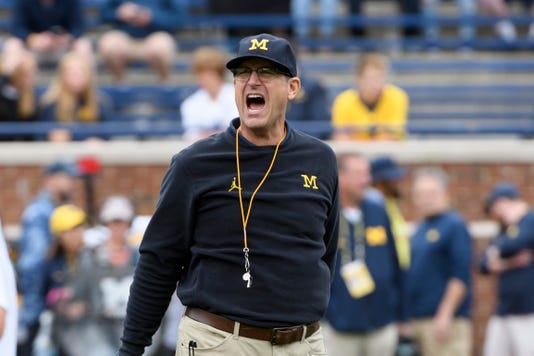 Michigan coach Jim Harbaugh might be wondering about his job security if he’s not able to beat rival Ohio State in the regular season finale for 2019.(Photo: David Guralnick, Detroit News)

Urban Meyer out. Ryan Day in.

You probably already knew that 2019 Big Ten storyline. But there are many more. Read on:

Michigan entered the ‘Shoe in November on a 10-game winning streak with the nation’s top-rated defense. Ohio State had just given up 51 points and 535 yards to Maryland. The narrative: If Harbaugh can’t win this time, he never will.

The storyline gets ramped up even more next season. Michigan will have a senior quarterback in Shea Patterson. The Game is in Ann Arbor. The opposing coach is Day, a rookie. And Dwayne Haskins is taking his talents to the NFL. If Harbaugh can’t win this time, he … never will?

Harbaugh’s record against rivals Ohio State, Michigan State and Notre Dame is 2-7, and his Michigan teams are 1-3 in bowls. He never has been more popular in Columbus, but is Harbaugh losing the Wolverines fan base?

Justin Fields, the No. 1 dual-threat quarterback and No. 2 overall recruit from the 2018 class, couldn’t beat out Jake Fromm at Georgia, and last week he announced he is transferring to Ohio State. His family reportedly has retained the same lawyer who helped Patterson attain immediate eligibility at Michigan after transferring from Ole Miss, and there has been speculation that Fields’ appeal to the NCAA will center on a racist comment made about him in the stands by a Georgia baseball player, who was dismissed from the team three days later.

Will Fields gain that eligibility, as basketball player Mark Smith did after leaving Illinois for Missouri? If so, would Fields win the starting job at Ohio State? With Haskins departing, the remaining quarterbacks are Tate Martell and rising redshirt freshman Matthew Baldwin.

Martell is respected for his work ethic — and feistiness. He stiff-armed questions about whether he would transfer by saying during Rose Bowl preparations: “Why would I leave for someone who hasn’t put a single second into this program? I have put two years of literally working my ass off into something that I’ve been waiting for and a dream I’ve had my whole life.”

Fields has advantages in arm talent and size (6-foot-3, 225 pounds to Martell’s 5-11, 210). Martell knows the system and might have the backing of current players. But how about the new head coach? 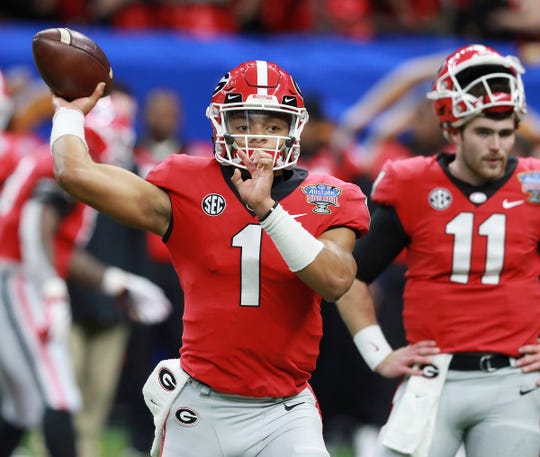 After Ohio State suspended Meyer for three games, The Athletic reported that Day would be designated the “coach-in-waiting.” Buckeyes honchos did not want to lose the quarterback whisperer to another program. Meyer placed his whistle around Day’s neck after the Buckeyes beat Washington in the Rose Bowl.

All Meyer did in seven seasons at Ohio State was go 83-9 with a national title, post an unblemished record against “our rival” (aka Michigan) and finish 1st, 1st, 1st, T-1st, T-1st, 1st and T-1st in the Big Ten standings.

Day shuffled his defensive staff Monday, naming Greg Mattison and Jeff Hafley as co-coordinators. Mattison is leaving Michigan, where he had assisted under Brady Hoke and Harbaugh since 2011. Hafley had been the 49ers defensive backs coach.

In the span of a week, Big Ten Commissioner Jim Delany went from saying the College Football Playoff “doesn’t define” the conference to indicating a desire for frank discussion about an eight-team playoff. Big Ten power brokers hate the fact SEC teams play eight conference games and schedule the likes of Liberty and The Citadel. It also steams them that the selection committee passed over three straight Big Ten champions.

So will they actually push for playoff expansion? Or is this merely a public plea to get the SEC (and ACC) to conform?

Days after Ohio State beat Northwestern in Indianapolis, Delany said eliminating divisions “is an item that has been discussed before … there is more discussion now than there was four years ago.”

What’s that all about? Do the Big Ten’s television partners want the potential for two Ohio State-Michigan games a season? Is Delany tired of seeing the East win the title game? Wisconsin won the first two, but that was during Legends and Leaders.

Since the divisional split, the East is 5-0 in Indy with one blowout (Ohio State 59-0 over Wisconsin), one reasonably close game (Ohio State 45, Northwestern 24) and three thrillers.

While the conference compass traditionally points east (Ohio State, Michigan, Penn State), the East barely had the regular-season edge over the West in 2018, going 11-10. For what it’s worth, the West went 4-1 in bowl games while the East was 1-3.

West folks rankle at the insinuation their side is weak.

“There has been nothing wrong with East and West,” Northwestern coach Pat Fitzgerald told the Tribune. “Is it a difference in about five games over the last five years? It’s not very many. If we want to have those discussions, my first question would be: Why? What is the empirical data?

“I like where we are right now. A lot of our fans can drive to the West games. The crossovers are great; they’re put together in ways that make it very competitive. Unless someone will produce some empirical data I’m not aware of, I don’t see what’s wrong with East and West.”

Johnson was the No. 2 pro-style quarterback and No. 30 overall prospect in the Class of 2017 in 247Sports.com’s composite rankings. The five-star recruit was rated higher than Fromm coming out of Brownsburg, Ind., and joins receiver Kyle Prater as the glossiest players to suit up for Fitzgerald.

The 6-2, 208-pound Johnson spent the 2018 season on NU’s scout team, impressing Thorson, who told the Tribune: “He is always in the quarterbacks (meeting) room. It’s cool to see someone working hard for it. … He is a really nice guy. He’s not going to be the loudest guy in the room. He’s a Christian guy, so we’re a lot alike in a lot of senses. He’s really humble but confident in his abilities. He spins it really well, can throw on the run well, is really athletic and can run around. I think the offense will be wide open.” 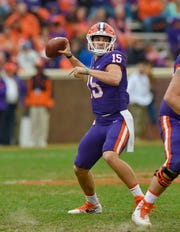 Clemson transfer quarterback Hunter Johnson will likely be the No. 1 quarterback on the Northwestern depth chart when the 2019 season begins. (Photo: Richard Shiro, AP)

Chris Ash must be hanging by a fingernail after Rutgers lost its final 11 games.

Illinois’ Lovie Smith is 9-27 with defenses that have gotten leakier (61st nationally to 86th to 128th) and crowds tinier during his time in Champaign. Would he survive a fourth losing season? Athletic director Josh Whitman extended his contract by two years, though the buyout figure is the thing. And it did not change – $4 million if Illinois launches him after next season.

What about Mark Dantonio? His last three seasons have featured a disaster, a rebirth and a dud. Has he accomplished enough at Michigan State to hatch his own exit strategy?

Illinois will welcome two intriguing prospects: receiver Jeff Thomas of East St. Louis and tight end Luke Ford of downstate Carterville. Ford was the nation’s No. 51 prospect last year and chose Georgia, where he appeared in nine games, making a four-yard catch. He hopes to gain immediate eligibility, citing the deteriorating health of his grandparents.

The talented Thomas got booted from Miami’s program, with then-coach Mark Richt saying: “We have high standards for excellence … conduct and commitment.”

Thomas, who scored five touchdowns over two seasons at the U, said in a since-deleted tweet he did not get kicked out, saying he came to an “agreement” with Richt.

Thomas was benched during stretches of games last season. A 2017 documentary on his East St. Louis team called “89 Blocks” documented his uneven behavior and a string of missed practices.

Your thoughts on Mike Locksley? If you’re like many, you think of his disastrous stint at New Mexico (2-26 with off-the-field issues). If you’re an Illini fan, you thank him for delivering D.C.-area studs such as Arrelious Benn and Vontae Davis in the mid-2000s.

And if you live in crab cake country, you’re thrilled the former Alabama offensive coordinator is Maryland’s new coach. As alumnus Scott Van Pelt put it on ESPN: “People outside the DMV won’t get this … but what the critics don’t get is that nobody in that area has more local respect from high school coaches and within that community than ‘Locks.’ “

Was Wisconsin’s five-loss season an aberration? Was Minnesota’s outstanding finish (dominant victories over Purdue, Wisconsin and Georgia Tech) a sign that the Gophers will contend for the Big Ten West? What to make of Purdue, which beat Ohio State 49-20 but gave up 56 first-half points to Auburn in the Music City Bowl? Can Rondale Moore make a Heisman Trophy run?

Who replaces Trace McSorley at Penn State? Will Scott Frost be proven right when he warned Big Ten foes before the 2018 season that they “better get us now”? And will Ryan Field, which was logistical hell for many of those arriving within 90 minutes of the Notre Dame game, be a disaster for the “Friday Night Lights” game against Ohio State?

And if so, will plans accelerate to renovate Ryan Field?

So many questions. The 2019 season cannot get here soon enough.