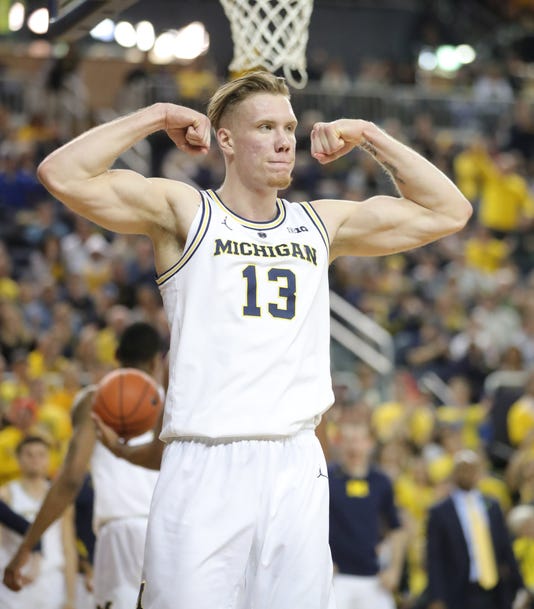 In another world, Ignas Brazdeikis could be doing all of this inside a caged octagon or a squared circle.

“Fighting was my first sport,” Michigan’s star freshman forward said Friday afternoon. “I didn’t pick up a basketball before I picked up some gloves.”

The Lithuanian-born Brazdeikis is the son of an athletic father, Sigis Brazdeikis, who began to put his son through fighting workouts before anything ever happened on a basketball court.

Learning how to fight was something that was required in the family, he says. But the training also created a mindset that has never really gone away.

If you’re going to fight people, you’d better be in great shape. There’s really no gray area with that.

“We’d do some crazy workouts. I’d have to pull the boxing bags, the heavy bags (around),” he said. “I (still) love watching it, the UFC and boxing right now. Huge fan. I chose basketball, I love basketball. But (fighting) definitely gave me confidence, that’s for sure. That’s where a lot of that comes from.

There’s no shortage of confidence in Brazdeikis. Michigan has known that since John Beilein started recruiting the 6-foot-7, 215-pounder after someone told him this was another version of Nik Stauskas.

Brazdeikis and Stauskas are both of Lithuanian descent. Both were dripping with confidence as freshmen. But their games aren’t exactly the same.

Still, Michigan’s entering a situation now where it’s starting to lean on Brazdeikis more and more every day. His usage is climbing. His minutes are soaring.

At some point, every freshman hits a wall. The biggest challenge is how quickly a player can get through it.

To no one’s surprise, Brazdeikis says he’ll be ready to blast through that wall whenever he needs to. Because he’s worked too hard for too long for any other outcome.

“My body’s equipped for this,” he says. “I’ve worked really hard. In the summer and before coming here to get ready for the Big Ten.”

Brazdeikis is averaging 33 minutes per game over Michigan’s last eight. He’s the team’s leading scorer at 16.4 points per game and second-leading rebounder with 5.5 per contest.

Beilein has had freshmen who have put up big minutes before. Trey Burke played 36.1 minutes per game as a freshman in 2011-12 and if he hit a wall, it didn’t last long:  He finished the season as the Big Ten co-freshman of the year.

Glenn Robinson III played 1,312 minutes as a true freshman in 2012-13, the sixth-most single-season total in U-M history. That included a run to the 2013 national title game, of course. Robinson had stretches in January and February where he was fighting with consistency due to a heavy workload.

Whether Brazdeikis — who played prep basketball in Canada — winds up in that rare air remains to be seen, but he does have an advantage those two didn’t.

“He’s a year older (than most freshmen), he’s 14 or 16 months older than Colin Castleton — who has a really young birthday,” Beilein said of Brazdeikis, who will turn 20 on Tuesday. “In Canada they stay that extra year and it’s really helped prepare him. His body is ready.

“It all worked out.”

Michigan needs heavy minutes out of Brazdeikis for a few reasons, chief among them that he has been the most consistent scorer through 14 games.

Like Jordan Poole and Charles Matthews, Brazdeikis can generate space for himself with the ball in his hands. He finishes at the rim better than anyone on the roster and his ability to generate Beilein’s “tough twos” has been elite for a first-year player.

Michigan’s also dealing with an injury situation with sixth man Isaiah Livers, who is questionable for Sunday’s game against Indiana (4:30 p.m., CBS) with back spasms.

Still, as the Wolverines enter the heart of Big Ten play, Brazdeikis will stay busy.

“It’d be different if it was a point guard or center playing those minutes, (but) he’s been grinding out defensively, he’s made foul shots and big 3’s at the end of games after playing (a lot),” Beilein said. “He’s really a tough kid. I think he’s in really good shape. He takes care of himself.”

Brazdeikis isn’t a UFC fighter. But he still trains with that mentality.

He’s prepared for this his whole life. And he’s not about to shy away from whatever workload Michigan throws his way.

“It’s a big league,” Brazdeikis says of the Big Ten. “And I feel my body’s ready for it.”

Michigan fans need to stop picking on Jim Harbaugh
Michigan-Dearborn Wolverines hit 12 from deep in win over No. 13 Warriors