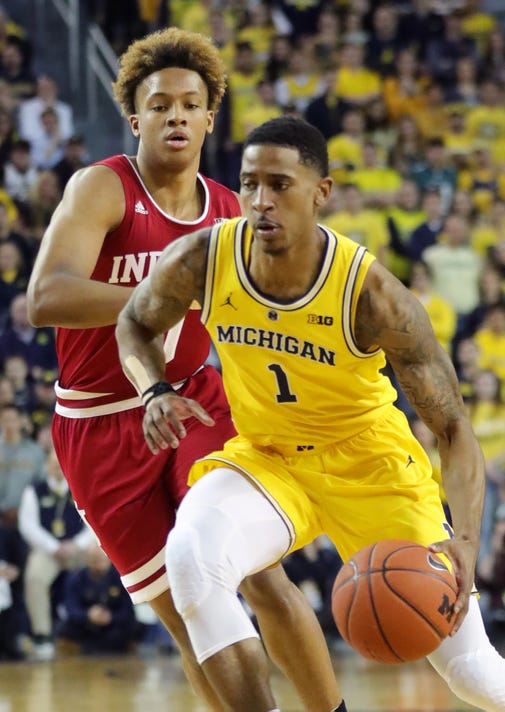 This is what John Beilein dreamed about during those long summer days in 2011, when he and his staff were sitting in parking lot construction trailers while the next foundation of Michigan basketball was being constructed.

Before the rash of NBA lottery picks and early draft declarations, when Beilein watched as Michigan rebuilt the Crisler Center and constructed its now state of the art William Davidson Player Development Center, he envisioned a program built and managed by experience, talent and responsibility.

Not that he didn’t enjoy the results of that influx of unexpected NBA-ready talent, which pushed the Wolverines to the national title game in 2013, and to the Elite Eight the following year. But it was off-script.

This team? The present-day version of Beilein’s Michigan basketball? This is as close to the original blueprint as he’ll ever get.

“We’re like a no-maintenance type of team,” Beilein said Sunday after the second-ranked Wolverines romped their way to a 15-0 start with a 74-63 win over No. 21 Indiana in Ann Arbor. “It’s just, we get to coach basketball with them. That’s the way it was last year.

The days of rolling three or four players through a program for four years and then having a magnificent senior day every spring have been gone for some time.

Beilein came to Michigan with that plan in mind but was forced to adapt early. He recruited Trey Burke to be Darius Morris’ backup and an eventual four-year point guard. Burke never backed up Morris, who left school for the NBA after two years, and lasted two himself — leaving as the consensus national player of the year after a sparkling sophomore campaign.

Michigan recruited Glenn Robinson III for longer than he actually played here, getting a commitment from him as a sophomore in high school before losing him to the NBA after two years. Nik Stauskas had almost no offers as a prep school player, yet he was gone after two years.

Michigan is going through its share of early departures these days. D.J. Wilson and Moritz Wagner both left early. 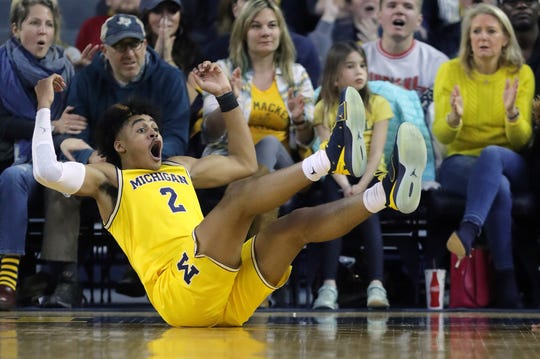 Jordan Poole reacts after being called for a foul during the second half on Sunday. (Photo: Kirthmon F. Dozier, Detroit Free Press)

And his current team’s core now features a veteran group of players who have the ultimate level of college basketball experience.

Now? They’re the foundation of a program that learns from the guys in front of them, delivers when it’s their time and passes that knowledge on to the next batch as they depart.

Michigan is 29-1 in its past 30 games. This is a championship-caliber program that forces opponents to bring their best.

The Wolverines have been a model of consistency, unafraid of anyone.

“You kind of just look at everything like ‘that’s another game’ now,” said Matthews, who had 18 points, six rebounds and four steals while guarding future Indiana lottery pick Romeo Langford on Sunday. “You can get a different vibe from the crowd and the energy in a building, but you know (no one) can get bigger than the moment.

“The moment’s not bigger than the team.” 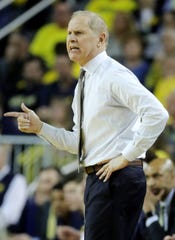 John Beilein during the first half Sunday against Indiana. Michigan is 29-1 over its past 30 games. (Photo: Kirthmon F. Dozier, Detroit Free Press)

The Wolverines travel to Illinois on Thursday with an opportunity to tie the school record for the best start to a season. The last group to pull that off was Beilein’s 2013 national runner-up.

That team lived on raw adrenaline and, at times, naivete as a group that had no idea how good it could be, how difficult things were about to get and what challenges were in front of them as winter arrived. They were extremely talented but had almost no on-floor experience when it came to moments like this. They eventually hit their wall and a 16-0 start turned into a No. 4 seed in the NCAA tournament.

This team is more like the group that came after it, the 2014 Big Ten title squad built on the foundation of talented sophomores and a year-long heroic effort from fifth-year senior Jordan Morgan.

Matthews tested the NBA waters before returning. Ignas Brazdeikis, one of the best freshmen in America, has already drawn the attention of pro scouts. Poole’s continued maturation as a sophomore will almost surely put him on that list before long, if he’s not already there. 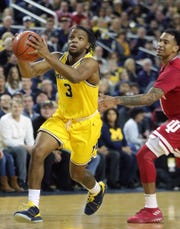 And it has Simpson, the junior point guard version of Morgan, who refuses to back down.

“We challenge him to be the all-time winningest player here,” Beilein said of Simpson. “He’s won a lot of games over these two-and-a-half years. But don’t discount Charles, it’s huge.

“This is about winning. This is his fourth year in college, he just wants to win.”

[ John Beilein mended his heart during the offseason. I did too. ]

Michigan will suffer its share of losses this season, but the team that delivers the first defeat will likely have to grab it the hard way.

Unlike previous Beilein teams, this group seems to be matchup-proof.

Michigan can play a big lineup or go small. It can get into a track meet or slow down and grind in the half-court.

The team isn’t without its flaws, of course. But it has a mixture of talent and experience no team in the nation can match. Duke has more talent than anyone. But not one of those star freshmen have walked into a football stadium on a Monday night in April with the entire world watching, like the Wolverines did last season against Villanova at the Alamodome in San Antonio.

And the Wolverines have done it the original Beilein way, with a modern twist.