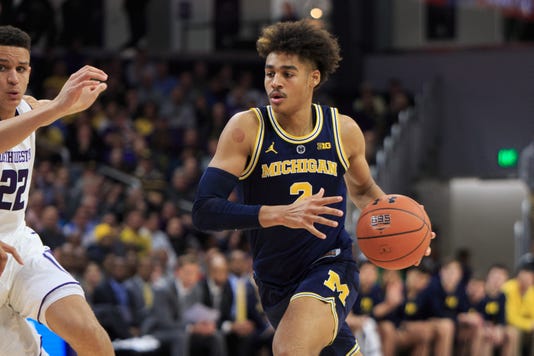 Michigan’s Jordan Poole drives to the basket against Northwestern in the first half at Welsh-Ryan Arena on Dec. 4, 2018 in Evanston, Ill.(Photo: Justin Casterline, Getty Images)

Tuesday night’s game at Welsh-Ryan Arena was no exception.

The Wolverines came to town looking for their first road win over the Wildcats since 2013.

No. 5 Michigan had enough to survive its first big test of the season, after blowing out every opponent prior to this, walking away with a 62-60 win over Northwestern.

Michigan threatened to pull away throughout the game, taking several double-digit leads. But Northwestern used a 15-2 run to cut Michigan’s lead to two. Then the Wildcats used another run to take their first lead of the game, and it was back-and-forth the rest of the way.

Jordan Poole scored the game’s final points, driving down the middle for a one-hand slam and a 62-60 lead with 1:53 to play.

The Wildcats got a look for the win, but Ryan Taylor’s desperation 3-pointer from the right wing caromed off the backboard and rim at the buzzer.

The Wolverines were in control for the first half and change.

Michigan jumped out to an early lead and threatened to run away several times.

Northwestern, though, kept things from getting out of control. And after Michigan went on a 9-0 run to open the second half, taking a 15-point lead, Northwestern responded with a 15-2 sprint of its own.

The Wolverines found themselves in the toughest spot of the season. They stretched the lead back to six, but then gave up a 7-0 run to Northwestern.

Ignas Brazdeikis, though, was huge. He led Michigan with 23 points on 9-for-18 shooting, and scored 13 in the second half.

Brazdeikis asserted himself whenever the Wolverines needed a basket to quell a Northwestern run. He hit the tying 3-pointer when Northwestern took a 54-51 lead.

For the most part, Michigan hasn’t had to deal with foul trouble this season.

That came to an end Tuesday. Charles Matthews picked up an early foul and sat for a while. He did so again when he and Jon Teske picked up their third fouls early in the second half, too.

That was a pivotal moment for Michigan. The Wolverines went with backup center Austin Davis. The move didn’t work, as Northwestern went on a big run.

Teske is so important to what Michigan does on both ends of the floor. He’s impactful on defense and knows where to be on offense. It doesn’t always show up on the stat sheet, but it did Tuesday. He finished with a team-high plus-minus rating of plus-15.

Zavier Simpson started the game playing well. He finished in a variety of ways at the rim, and showed off his sky hook.

But he struggled later in the second half. Northwestern dared him to shoot, and Simpson couldn’t make the Wildcats pay. At one point, he took and missed 3s on three consecutive possessions.

Enter Eli Brooks. Coach John Beilein elected to go with the sophomore backup guard from the 6:24 mark until their were 14 seconds left, when Northwestern had the ball for the final possession.

Brooks took and made his only shot during that span, a 3-pointer that gave Michigan a one-point lead as the two teams yo-yoed back and forth.