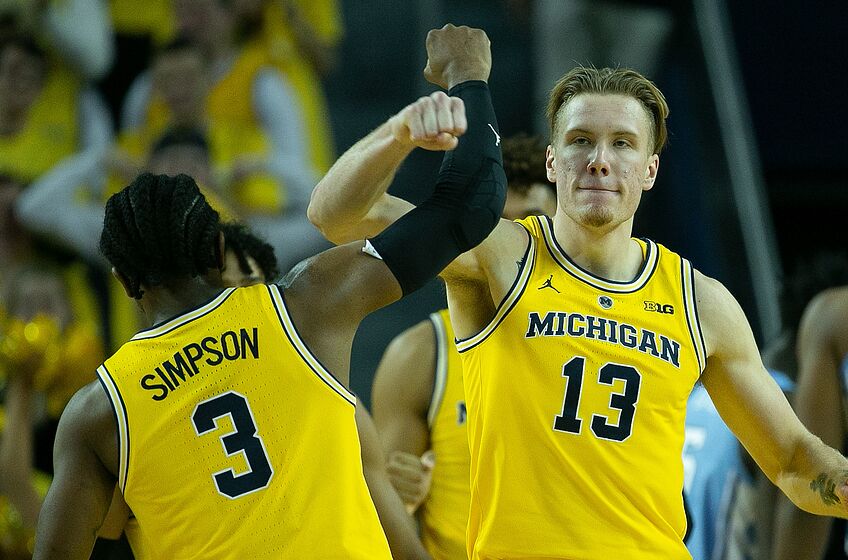 Michigan Basketball: John Beilein is what Jim Harbaugh should be by Chris Peterson

In a season where it seemed Michigan basketball was reloading, a funny thing happened. The Wolverines instead turned into a legit title contender.

An argument can be made John Beilein has done some of his best coaching. Unlike the football team, he has seen his young Michigan basketball squad off to an undefeated start, beating two ranked teams in the process.

First it was Villanova. Then North Carolina. But that is not the best part. The best part is how Michigan basketball has won games. The Wolverines smother teams defensively. They force turnovers and also get inside the opposing teams heads.

Unlike past Beilein teams that focused on offense there seems to have been a switch in philosophy. Michigan now seems to be driven by defense. Perhaps, it was the failure in last March’s National Championship game at the hands of Villanova.

Michigan assistant coach Luke Yaklich has spearheaded the defensive charge. He needs to be recognized for his outstanding work with the unit. It looks like Michigan is going to make it as difficult as they can for teams to get a shot off.

The best coaches are the ones that adapt. They see a weakness in their team and address it with a passion unknown to mankind. Michigan is still classic John Beilein offensively. Spacing the court with shooting using the dribble and passes to set up shots.

However, Michigan basketball looks hungry to avenge last seasons disappointment. They are focused. No more flying under the radar. No more it could be a year of growing pains.

After North Carolina, Michigan threw that out the window. They showed they will be a force. Well coached and playing with a chip on their shoulder. Big Ten play cannot start soon enough.