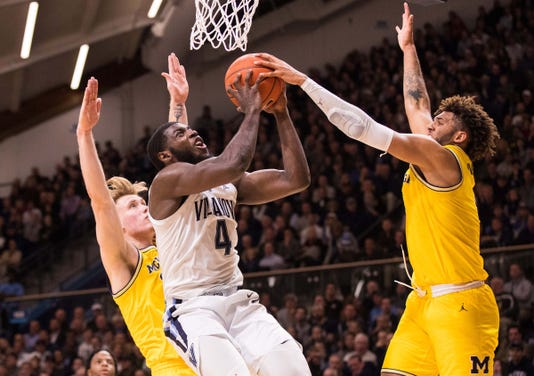 The trio, fresh off a 73-46 win over defending national champion and No. 8-ranked Villanova, sat down at a small table, Beilein in the middle, Simpson to his right and Matthews on his left.

Then Beilein started talking about his team’s defense.

“We really are gonna probably be as good as our defense is gonna be this year,” he said. “And it was really good today. People ask, ‘Well what’s this scheme or what did you do?’ We have really good individual defenders, including our big guy, Jon Teske.

“They’re really good at picking you apart and finding a weakness. We didn’t have many weaknesses individually on defense today and that was a big difference.”

Someone followed up by asking whether Michigan’s defensive approach from last season had carried over.

In response, Beilein put an arm around each of his players, patting their backs. Matthews, with his face resting upon his hands, smiled.

Wolverines show their fire in statement win over No. 8 Villanova

John Beilein mended his heart during the offseason. I did too.

Michigan basketball (3-0) has entered a new era. The Wolverines are no longer recognized for scorching offenses that can shoot a team into submission. Instead, they’re headed for a second consecutive season as a defensive juggernaut.

This team’s identity is drawn from two players who don’t pride themselves on getting buckets — but on stopping their opponents from doing so.

When Michigan looked at its roster after last year’s blowout loss to Villanova in the national title game, there were big holes to fill.

Moritz Wagner and his raw, fiery emotion moved on. So did Muhammad-Ali Abdur-Rahkman and Duncan Robinson, two seniors who had been the epitome of steadiness and leadership.

Even Matthews wasn’t guaranteed to come back. He took a long, hard look at the NBA.

But when he did decide to return, Michigan had its foundation — the two pillars of this team. The Wolverines would build around Simpson and Matthews this season.

It takes time for players to mold teams in their image. Still, Simpson and Matthews have provided as strong of a base as any for Michigan. They have kept the defensive machine humming, as has Beilein and assistant coach Luke Yaklich. The Wolverines don’t know what they have in their offense yet, but they’ll go forward knowing they can rely on this defense against any team in the nation.

And it goes beyond that, too. As Villanova learned, this year’s Michigan team knows how to play tough. The Wolverines refused to be intimidated; they refused to let the Wildcats impose their will.

That was certainly evident during the second half when, after fighting for a loose ball, Simpson was confronted by Villanova forward Dhamir Cosby-Roundtree — and all four of his teammates on the court rushed over, eager to back their captain up.

Freshman forward Ignas Brazdeikis was one of the first ones there. After the game, Simpson called Brazdeikis a ‘pit bull.’

It was fitting, considering Simpson himself was called the same thing by Beilein last season. Simpson took the comparison and ran with it.

Brazdeikis and the rest of his teammates have followed suit.

“Since the summer, since our scrimmages, we’re all dogs here, you know?” said freshman forward Ignas Brazdeikis. “(Simpson and Matthews) instill that to us. I feel like we’re building that up, and it’s really working for us.”

Hoosiers at Wolverines — What the Michigan Coaches and Media are Saying
Michigan football vs. Indiana: Live blog, score updates