Michigan coach talks about his team’s performance in Saturday’s 89-78 win that pushed the Wolverines’ record to 10-0.
James Hawkins, The Detroit News 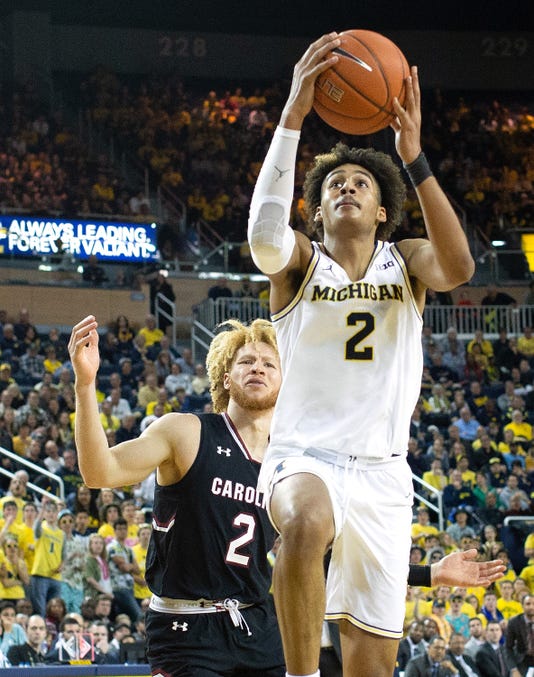 Ann Arbor — The floaties, sunglasses, Hawaiian shirts and leis were out in full force.

With a “Poole Party” taking over Crisler Center on Saturday, sophomore guard Jordan Poole delivered and made a splash.

Behind a career-high 26 points from Poole, with 19 coming in the second half, No. 5 Michigan was able to overcome a sloppy first half and push past South Carolina for an 89-78 win.

It was the second straight season the Maize Rage, Michigan’s student cheering section, held the themed event. Last season, Poole was held scoreless on 0-for-4 shooting in an overtime win over Minnesota, which prompted coach John Beilein to quip that “the Poole was closed.”

“Being a freshman and only playing 11 minutes, I kind of wanted to go out there and, you know what I’m saying, it is a ‘Poole Party.’ Today I just continued to stay locked in how I have been, make the right plays and it’s another game.”

Poole finished 8-for-12 from the field, including 4-for-7 from 3-point range and 6-for-7 from the free-throw line, en route to his third 20-point performance of the season.

He received plenty of assistance with freshman forward Ignas Brazdeikis adding 17 points, 11 of those on free throws, and junior center Jon Teske nearly recording a double-double with 15 points and nine rebounds for Michigan (10-0, 2-0 Big Ten), which has won its first 10 games of the season for just the fourth time in program history and the first time since 2012-13.

But it was Poole who made the biggest waves and helped the Wolverines maintain a comfortable lead in the second half, pouring in 15 points in the first 10 minutes after halftime.

He scored eight straight points for Michigan with two 3-pointers and a fast-break dunk during a stretch in which Teske thwarted several South Carolina attempts at the rim to turn a six-point lead at the break into a 56-45 advantage with 15:18 to play.

“I just knew we ended the first half pretty slow and not the way that we wanted to,” Poole said of South Carolina’s late run that chopped an 11-point lead down to four.

“We are huge on the first four minutes of the second half and coming out strong. I feel like we were able to set the tone for the entire second half by having the run we did. We were able to get stops and we had guys outletting the ball. X (Zavier Simpson) is able to find me on a couple shots and being able to knock those down set the tone.”

Poole continued his second-half outburst by corralling an outlet pass that nearly looked like it was heading out of bounds and scoring on a layup before adding another deep 3-pointer to extend the lead to 65-52 at the 12:15 mark.

When South Carolina (4-5) got tough buckets to cut the deficit to nine — the closest the Gamecocks would get over the final 11 minutes — Poole quickly answered with a floater to re-establish a double-digit lead and tie his career-high with 22 points, which he set this season on Nov. 17 against George Washington.

“I saw him a lot in high school. He’s a real good player,” South Carolina coach Frank Martin said. “He’s what we call a hard shot-maker.

“He makes the easy shots and he makes the hard shots. Those are the guys that are hard to guard.”

Poole set his new career mark by sinking two free throws following a technical foul on South Carolina’s bench and assisted on an alley-oop slam from Teske that gave Michigan its largest lead, 79-63, with 6:21 remaining.

South Carolina treaded water and used a 7-0 spurt to pull within 82-73 at the 3:23 mark, but sophomore forward Isaiah Livers (12 points, four made 3-pointers) buried a deep ball and Poole capped his big day with another driving score to keep Michigan’s perfect record intact.

Chris Silva finished with 18 points and 12 rebounds and Maik Kotsar scored 16 for South Carolina, which became the first team to score more than 70 points and shoot better than 50 percent (32-for-62) against Michigan this season.

The Wolverines will wrap up their nonconference schedule with three home games over the next three weeks — Western Michigan (Dec. 15), Air Force (Dec. 22) and Binghamton (Dec. 30) — before resuming Big Ten play on Jan. 3.

“I’m really happy to be 10-0 and I mean that sincerely,” Beilein said. “I’m usually expecting the opposite. I’m looking at things like, ‘What can go wrong?’ instead of, ‘Hey we got it rolling.’ That’s my mindset.

“At the same time, I’m really happy we’re 10-0. We’d like to, one game at a time, finish the nonconference and go into the conference with a similar record if we can.”