Jim Harbaugh yet to build his Michigan football ‘cathedral’ 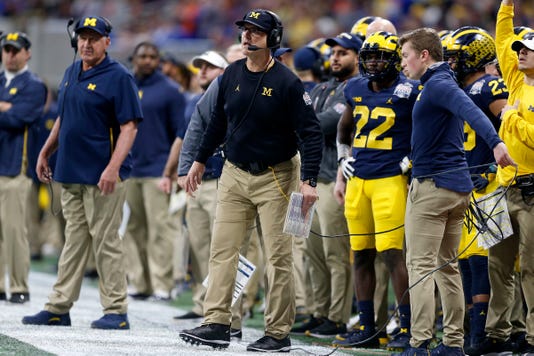 Fans stood outside, faces pressed against the glass, peering into windows to catch a glimpse of the most attended news conference held by Michigan’s athletic department since the patriarch of the school’s most famous asset, Bo Schembechler, retired.

Smiles everywhere. Hugs everywhere. Tears everywhere. The NFL Network cut into the event live, allowing the football world to fixate on Ann Arbor as Jim Harbaugh walked down a hallway, turned right and returned to his alma mater.

“I don’t know if anybody saw me trip on the way in,” Harbaugh would quip as he stumbled near a gaggle of assembled photographers near a podium. “A lesser athlete would have gone down.”

Baumgardner: Jim Harbaugh’s Michigan football must adapt or get left behind

This was four years ago, nearly to the day: Dec. 30, 2014. It feels like another lifetime, considering all that has happened between then and now, but it’s not. Harbaugh came to Michigan as the most coveted coach in the game, NFL or college, and began what most expected to be a fascinating journey.

“I think of myself as more of a construction guy,” Harbaugh said that day. “You build a home, and hopefully it’s a great cathedral. I’m at that point where even though you’ve done well and built some pretty nice homes, you have to do it again, and you have to prove it again. But I would really like to live in one permanently. 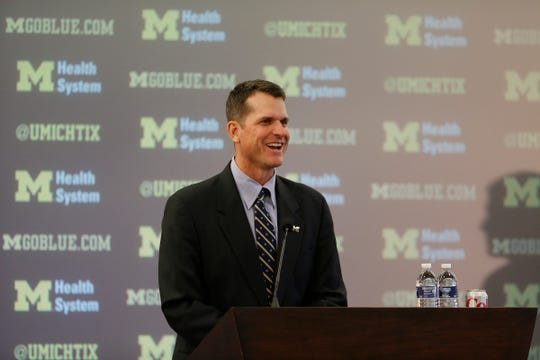 Four years. Fifty-two games. Some triumph, some heartbreak and more polarizing moments than most are willing to count.

But still no cathedral.

More: Michigan football: What we learned in Peach Bowl and what’s next

And now, 48 months after arriving as the man many believed to be the savior of this football program, Harbaugh finds himself fully entrenched in the reality of this job.

At most places, a 73-percent win rate (38-14) in four years would be good enough. But this isn’t most places. This wasn’t most hires. And the starved portion of Michigan’s fan base is bordering on something far south of exhaustion.

Harbaugh has built a nice house here. But Ohio State still has keys to the front door, Michigan State has thrown a few rocks through the window and something must be wrong with the furnace — because every time the weather turns cold, the pipes freeze.

The intensity in Ann Arbor never fades and Harbaugh has reached a point with many where nothing short of a win over Ohio State next season and a spot in the Big Ten title game will be acceptable.

For some, it’s difficult to fathom he has gone this long without either. He never declared himself a savior and some of that pressure existed when Harbaugh arrived. Some of it was self-created, though, and some of it happens because — as he was the day Michigan coronated him four years ago — he’s one of the biggest stars in his profession.

Jeff Seidel: Michigan’s 2018 football season was nothing but a mirage 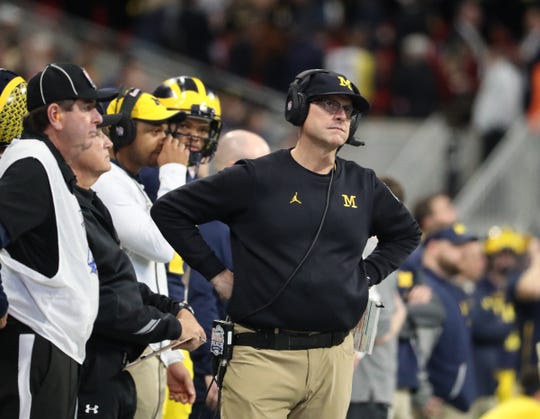 Fan pressure is difficult. Supporters want a coach who runs his program with integrity on a playing field that sometimes feels void of it altogether. They want to win championships while playing by the rules without exception. In modern college football, that’s difficult.

They want to sign every prominent recruit as a midwest school without a fertile prospect base and strict academic standards. They want to beat Ohio State. They never want to lose to Michigan State. Anything less doesn’t work. Never has, probably never will.

These expectations happen when Michigan makes an overt point of explaining on the day Harbaugh was hired that his salary would be $5 million, exactly the same as it was when he was in the NFL. Money had nothing to do with this, the narrative claimed. But a year later, word leaked out about a life insurance policy that would push his compensation up into the rarified air of other coaches who owned national title rings, making him one of the highest earners in the game. And, with that, more public pressure.

There were his Twitter spats and the shots at the Southeastern Conference. The headline-grabbing recruiting methods. The claims that Michigan was the “33rd NFL team” and so on and so forth. The opportunity for attention was there, no one resisted.

At the time, back in 2015, fans adored it. Every time Harbaugh would shut a reporter’s question down, Twitter lit up.

In spite of all this, of course, Harbaugh is 36-8 against teams not named Ohio State and Michigan State.

Most important, though, he’s 0-for-4 in every championship category.

This isn’t a collapsing football program; it’s a stuck program.

Michigan has had a revolving door of assistant coaches over the past four years, and 25 percent of Harbaugh’s 2016 and 2017 recruiting classes have either left the program via transfer, medically retired or been dismissed.

The offense plays too slow. The defense can’t figure it out against elite teams. And yet he has won 10 games in three of his four years, the Academic Progress Rate is very good and his upcoming signing class is one of the best in America.

Expectations, fair or not, are Harbaugh’s biggest issue. Some of that is beyond his control, some of it was self-fueled and part is just dealing with the modern structure of a game that was much easier 30 years ago, when league championships were shared and bowl games meant the world to everyone.

Harbaugh called Michigan’s 2018 season, another 10-3 mark, “very good” on Saturday. Maybe that’s true for some. But for the keepers of those expectations, it wasn’t.

Because people didn’t press their face against that glass or shed tears of joy while watching a news conference four years ago for these results.

They wanted a cathedral, the one Harbaugh spoke of.

Jeff Seidel: Michigan has the talent but Harbaugh must change his offense