How Josh Uche went from bench to sack star

Shortly after Michigan’s 26-19 loss to South Carolina in the Outback Bowl in January, Josh Uche sought out a meeting with the man who recruited him to Ann Arbor.

Defensive coordinator Don Brown had sold Uche on playing at Michigan when they signed him as a part of the 2016 class. The Wolverines saw Uche, a 3-star prospect, as a strongside linebacker who could rush the passer, stop the run and drop back into coverage.

Uche didn’t play much as a freshman or sophomore. It was frustrating for a player who thought he could quickly contribute to the team and make an impact. And as he watched his team stumble to an 8-5 record in 2017, capped by a humbling loss to the Gamecocks, Uche’s displeasure only built.

“I just felt like I was useless at the time,” Uche said. “It was just frustrating to me because I wanted to be out there with my teammates, helping, contributing and doing something to just help the team win. When I wouldn’t be able to do that, I just questioned if this was the right fit for me.”

The meeting with Brown was the boiling point. Uche “expressed his frustrations” and asked for more playing time. Brown told him to earn it.

When Brown recounted the incident while speaking with reporters this past August, he said Uche may have wanted to fight him.

It’s easy to smile about it now. Those struggles seem far in the distance. Uche has been the most surprising player on the nation’s top-ranked defense, leading the Wolverines with seven sacks despite playing a fraction of the available snaps each game.

“He’s got a real knack to create speed off the edge and convert that to power when he needs it, but also has the threat of the speed around the edge,” Jim Harbaugh said. “He’s highly determined and motivated. He’s a really special player as well.”

Uche isn’t satisfied with where he’s at. He already has made a name for himself, but now he wants to prove he isn’t just a pass-rusher — that he can do more than just sack the quarterback.

“Now, third down is what I’m really good at, it’s one of my strong suits,” Uche said, “but I can do a lot of other things that people haven’t really seen yet.”

Not a typical recruit

It was the spring of Uche’s sophomore year, and he had just transferred from Palmetto High School to Columbus, a private, all-boys Catholic school in Florida with a strong football program.

Uche began his career at Columbus working with the linebackers. “About halfway” through spring practices, the staff moved Uche to defensive end.

Marti, the defensive line coach at the time, didn’t know what to expect. Then he put Uche in a three-point stance. 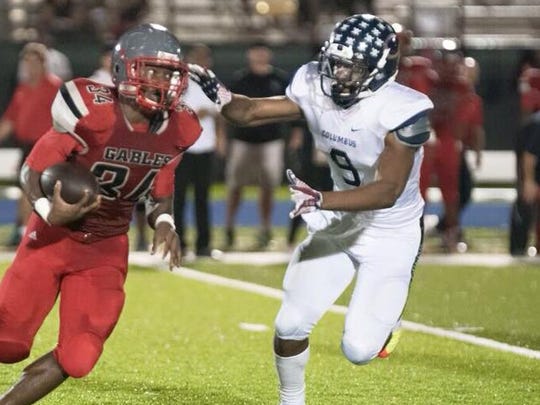 Josh Uche is listed at 6-feet-1 and 217 pounds. He committed to U-M on Jan. 22, 2016, over scholarship offers from Alabama, Auburn, Florida and Miami (Fla.), among others. (Photo: Courtesy of Columbus High)

“The first time I saw him come off the football, I knew I had something special,” Marti said. “I knew I had a Division-I talent on my hands. I’ve been coaching for a little while now, and I actually have a few other kids to Division I schools, and his particular quickness and get-off is the best I’ve ever seen.”

Uche, the son of Nigerian immigrants, grew up in Miami, a hotbed of football talent. The Wolverines boast three starters on defense — Devin Bush Jr., Josh Metellus and Devin Gil — who also are from South Florida.

Uche didn’t join his peers as a highly recruited prospect with dozens of offers until the end of his high school career. He didn’t play his freshman year, and then missed much of the next season because his dad had pulled him out.

“He believes in school, education more than anything. He didn’t even really want me playing football,” Uche said. “At the first high school I was at, my siblings were getting these little flyers in the mail, ‘Hey, come to our college,’ or whatever, and I wasn’t getting them and I was playing football at the time. He was mad and he thought I wasn’t focusing on school, so he pulled me out of football. I was out for a year or something like that.”

The transfer to Columbus provided a fresh start. But even then, it took time for Uche to learn what his coaches wanted from him and to develop into a Division-I prospect.

“Yeah, he was a little light,” said Columbus head coach Chris Merritt. “His football IQ wasn’t what the other kids were at.”

For the first three games of his junior year, Uche was used solely as a situational pass-rusher. He mostly entered the game on second-and-long and third-down situations, but as his technique and understanding improved, he worked his way onto the field for every down.

Later that year, Uche and Columbus dispatched a Flanagan team that featured Bush, Metellus and Gil to reach the state title game.

“He was disruptive,” Bush recalled. “He was doing pretty much the same thing he’s doing here. He was a pass-rusher who had his hand in his dirt, and he was a problem off the edge.”

In his first full year of high school football, Uche had 34 tackles and 8.5 sacks. The next season, he had 66 tackles and 14 sacks and was named to the same All-State team as the Flanagan trio.

“By the time he was a senior,” Marti said, “I would say he was probably one of the best defensive players here down in South Florida.”

What took so long?

The physical talent and pass-rushing ability have always been there. Which begs the question: why did Uche spend his first two seasons at Michigan on the sideline?

“Since being at Michigan,” Uche explains, “it’s kind of been a struggle.”

As a freshman, Uche tore his meniscus and caught a “bad virus.” He played in four games that season. The next year, he suffered a stress fracture in his foot and missed fall camp before seeing limited time in 10 games.

Uche understood why he wasn’t getting many snaps; Michigan’s staff simply didn’t know what he could do. Yet he felt that when he did play, he flashed enough to warrant more snaps.

“It was a battle that was happening with myself,” Uche said. “ ‘I deserve more, but I know why.’ ”

His meeting with Brown changed the trajectory of his career. However harsh Brown’s response may have been, it still came from the man who had brought Uche from Miami to Ann Arbor — a man who Uche trusts completely.

Uche liked Brown’s bluntness. He listened to what his coach had to say. And then he began to feed off all of the frustration that came from sitting on the bench.

The 6-foot-2 Uche reached 240 pounds (the roster currently lists him at 238) while still running a laser-timed 4.56 40-yard dash. He challenged himself to compete against Bush, Chase Winovich and Rashan Gary in workouts — players “at the level” Uche wanted to be at. He worked with cornerbacks Lavert Hill and Ambry Thomas on his footwork.

It paid off. According to Uche, he led the team in sacks in spring ball and fall camp — and by a “pretty good margin.”

“During camp, you could easily see that he was an elite level pass-rusher and he’s able to show that in the games now,” linebacker Jordan Glasgow said.

Entering this season, Uche garnered a considerable amount of hype — especially for a backup linebacker. And even then, he got off to a slow start.

And then junior defensive end Rashan Gary left Michigan’s fourth game of the season, a 20-17 win over Northwestern, with an injury.

In that game, Uche tallied two sacks, including one on the last play to seal the win. He has added two multi-sack games since then, against Michigan State and Penn State.

“Sacks aren’t easy to come by,” Uche said. “Considering that I don’t play that much, the snaps that I get are very minimal, it’s just a testament to working hard and whatever opportunities I get, to capitalize on those opportunities. I do take great pride because I know how much of a struggle it was to even get to this point and how hard I worked.”

Uche doesn’t want to just be the reliever, the situational pass-rusher who comes in on third down. He wants to be the ace — the every-down linebacker whose impact is felt every play.

To get there? Well, Uche isn’t asking for much — just another chance.

“I want to be a first-round draft pick. That’s my ultimate goal, because I believe I have the talent to do so,” Uche said. “I believe if I can showcase those other things, that will put me in the direction to achieve that goal.

“I cover guys like Sean McKeon, Gentry, the best in the country, and you can ask them about my coverage, they’ll tell you. Them and Nick Eubanks. If I can cover those guys, I know I can cover anyone. That’s my biggest goal. I want to prove to people that I can do more than just pass rush.”