How does OSU change alter Michigan’s quest for Zach Harrison?

Free Press special writer Chris Nelsen spoke to Vernon Carey Jr., the No. 2 overall recruit in the 2019 class, who has MSU, Duke and UNC in his final three. Carey had 18 points and 10 boards in a season-opening win Nov. 27, 2018, in Davie, Fla.
Wochit

Do you have a prediction on Vernon Carey? – RobNolan22

Here’s one prediction, Rob: Vernon Carey Jr. will not go to North Carolina. Carey recently named a top 3 of UNC, Michigan State and Duke, and I can say with confidence this decision will come down to MSU and Duke. The 6-10, 275-pound power forward will make his announcement Thursday at his school gymnasium on SportsCenter around 12:30.

Everything I’ve heard up to this point makes me believe Carey is still torn between MSU and Duke. He has been talking to former players of those schools, as well as his family and inner-circle to go over everything before finalizing his decision. I understand why MSU fans are worried about this recruitment as the Spartans have lost several big-time recruiting battles to Duke in recent memory, of course none more memorable (or forgettable) than Jabari Parker in December of 2012. I think we will begin to hear more rumblings on Thursday as this announcement approaches, but as of right now, I think it’s fair to say this could go either way.

Does Michigan have any other 4 or 5-star RB recruits lined up besides Zach Charbonnet? -@filosofella

Eric Gray was expected to be other elite running back in the Wolverines’ 2019 class, but he decommitted from Michigan last weekend. He was what I would call a “soft commit” for a while, meaning he was taking visits and looking elsewhere while technically being verbally committed to Michigan.

Now that he has made his decommitment official, Charbonnet is the only true running back commit in this class. My guess is that will remain the case for 2019, while the Wolverines shift their focus to running back in the 2020 class. Michael Drennen (Dublin, Ohio) and Jalen Berger (Ramsey, N.J.) are a couple names to keep an eye on. Both are impressive 4-star backs who coach Jim Harbaugh and his staff have already offered and would love to land in 2020.

Will Michigan be able to land prize recruit Zach Harrison and finish the class with any type of momentum? – @jamara23732 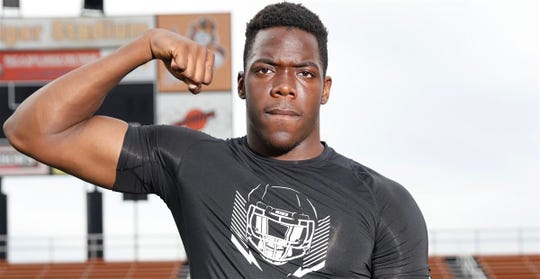 With Urban Meyer announcing he will retire after the Rose Bowl, many people took to Twitter to ask about how this affected the recruitment of Zach Harrison (Lewis Center, Ohio) and if it helped Michigan’s chances of landing the 5-star defensive end.

I’m not sure it has a ton of effect on this recruitment and gives Michigan any better chances than they already had. Meyer wasn’t the primary recruiter for Harrison. That would be defensive line coach Larry Johnson, who Harrison has gone on record and referred to as the “best defensive line coach in the country.” Ryan Day becoming the new head coach shouldn’t have any real effect on Harrison’s recruitment either, as Day is an offensive minded-coach who wasn’t heavily involved in this recruitment. I understand Michigan fans being nervous about Harrison because of the one-sided result of the OSU vs. U-M game, but in most cases, relationships with coaches and players matter much more than a result of one football game.

One major positive Wolverines fans can take from this is I doubt Harrison would commit to Ohio State before having several conversations with the Buckeyes new head coach. Those conversations need to happen soon and often if Ohio State wants to gain momentum, as the early signing day starts Dec. 19. Michigan has months of pre-existing relationships on their side.

Seidel: With Urban Meyer out, Michigan, Michigan State can win in recruiting

Based on the Ohio State game, Michigan still needs speed. Is there an effort to look at that vs. strength or other areas in recruiting? – Frank The Tank

I have a magic number for you Frank, and that number is six. That is the number of players in the Wolverines’ 2019 recruiting class who run a sub-4.6 40-yard dash. And keep in mind, there are probably several more prospects on that list, whose times aren’t recorded or up to date.

The top player in this class is 5-star safety Dax Hill, who also happens to be one of the fastest players in the nation. The Wolverines are bringing in an abundance of speed in this class. And many of those prospects with elite-speed play are on the defensive side of the ball, which should allow this defense, in time, to stick with speedy receivers like Ohio State has. With Don Brown’s aggressive defensive schemes, speed is vitally important, and I think the Wolverines should have plenty of it going forward.