Florida expects to have all players vs. Michigan in Peach Bowl 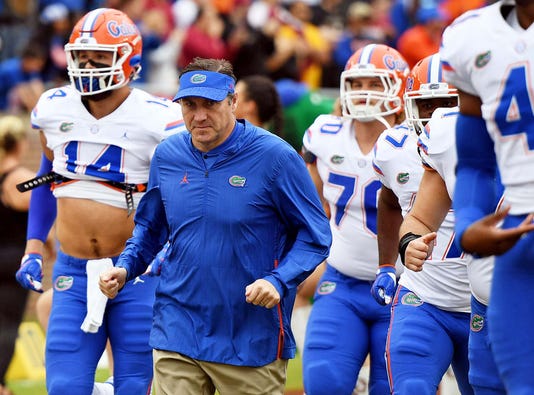 ATLANTA — Florida coach Dan Mullen told reporters Monday that he expects to have all draft-eligible players active and in action Saturday against Michigan football in the Peach Bowl.

U-M, meanwhile, will play without at least three starters as defensive end Rashan Gary, linebacker Devin Bush Jr. and running back Karan Higdon have all announced their decision to sit the game as they begin preparations for the NFL draft.

Michigan vs. Florida: What’s on the line in Peach Bowl

U-M heads to Peach Bowl with future in view

Michigan coach Jim Harbaugh confirmed Gary’s decision not to play, but would not give any specifics on others when asked about it earlier in the month.

On Monday, Mullen offered his perspective on the situation — as several players across the country have already opted to sit out their respective postseason games.

“It’s a very personal decision for guys. … When you look at that thing, what I tell the guys is to just be all in one way or the other. If you don’t want to play, that’s great. Be all in on it. Don’t have any regrets. And if you decide to play, don’t have any regrets that you did,” Mullen said. “I think when that happens you’re going to be really confident in your performance. I sat down with our guys and said ‘hey, we’d love you to play and I think the benefit of playing is huge.’

“We’re talking about guys who want to go to the next level. Well, they get the opportunity to go put a game on film against Michigan. That’s a top-10 team. (Scouts) will pick three or four games to watch these guys perform, (this) will be one of those three or four games. You have an opportunity to put that on film, that’s a huge plus. But it’s a really personal decision for the individual.”

Most of the players who have opted to sit out their respective bowl games this year are juniors who are declaring for the draft early.

That was the case with Gary, who declared two days after Michigan’s regular-season ending loss at Ohio State in November. Bush, who injured his hip in that game, declared last week.

Both are expected to be first-round draft picks this spring.

Higdon, meanwhile, is a senior who is not projected as a first-rounder at the moment. He does plan to participate in Senior Bowl activities next month in advance of the combine. He, along with Bush, was also elected as a U-M captain this season.

Harbaugh hasn’t commented on the matter.

Mullen, meanwhile, acknowledges these decisions as personal choices made by the players. But either way, they need to be done without hesitation and on their own.

“I don’t tell them what they have to do, I just say ‘tell me what you’re thinking and why,’ but whatever you’re going, make sure you go all-in on it,” Mullen said. “You don’t want to leave your program kind of (halfway), right? … You want your guys saying they’re prepping for their future and guys will respect that. Or guys saying ‘I’m going to play for this team, put that uniform on one more time and try to finish the year as part of a top 10 team,’ and guys respect that.”

roundtable previews peach bowl, fixes the offense, the program and more
Michigan Basketball: Wolverines Surge To No. 2 In AP Poll