Spring Grove’s Eli Brooks is having another standout season in his senior year. Hear what his teammates and an opponent have to say about playing alongside and against the University of Michigan recruit.
Jim Seip, GameTimePA.com 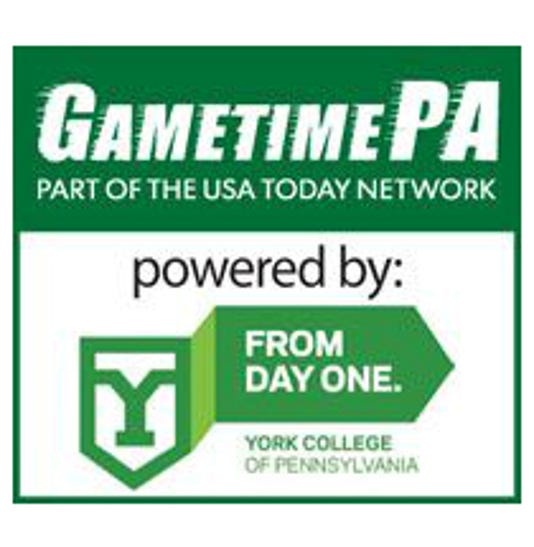 A highlight video was shown documenting the Wolverines’ thrilling ride to the NCAA title game. All the great moments were recounted, from the Big Ten championship win over Purdue to the buzzer-beater against Houston in the second round of the NCAA Tournament and the Final Four victory over Loyola.

Rarely did Brooks see himself.

It’s something Brooks doesn’t want to go through again.

Or to put it better: It’s something he’d like to go through differently.

“I remember seeing all the highlights and wanting to see my face,” Brooks said in a recent phone interview. 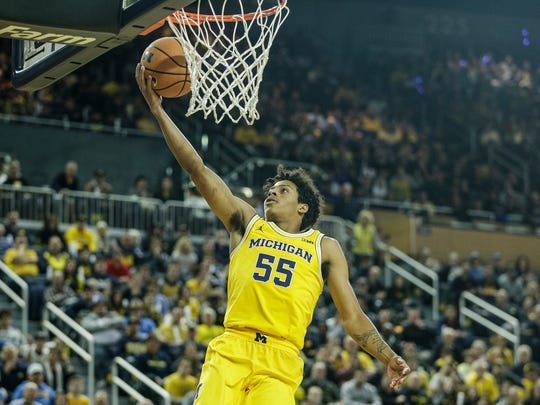 Another Michigan postseason run is certainly possible this March, and Brooks could be a factor this time. The Wolverines are undefeated and ranked No. 2 in the country by the Associated Press with Brooks playing about 17 minutes per game off the bench. The Spring Grove native is averaging 4.3 points, 1.8 assists and 1.2 rebounds.

Most importantly, he’s shooting 45 percent from the field after finishing just over 30 percent last season.

Stats aside, Brooks is happy to be a contributing to a team that seems to have learned the right lessons from last season’s incredible run and disappointing loss to Villanova in the national title game.

“It feels good to play a part in a team that’s so successful right now,” Brooks said. “After last year, we were down about not winning but then we reflected on how many people stayed over the summer to work on their games. We were young last year and we had to learn on the go.

“We learned there are going to be bumps in the road.” 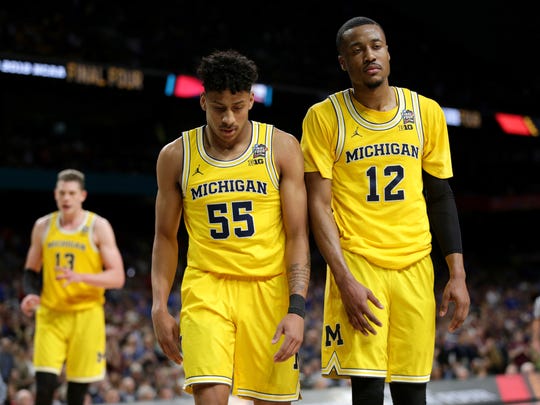 Michigan guard Eli Brooks (55) and guard Muhammad-Ali Abdur-Rahkman leave the floor at halftime, down 29-22 to Loyola-Chicago, in the Final Four on Saturday, March 31, 2018, at the Alamodome in San Antonio. (Photo: Junfu Han, Detroit Free Press)

About two weeks after Brooks fell out of the rotation last season, Michigan point guard coach DeAndre Haynes pulled him aside.

He was blunt in his evaluation.

“He said, ‘This isn’t the kid we recruited,'” Brooks said. “He said I didn’t look like myself.”

Brooks arrived at Michigan following a high school career in which he scored 2,426 points and averaged over 30 his senior season. He also starred at point guard in AAU for the Jersey Shore Warriors, playing with and against future Division I players.

Putting the ball in the basket had never been a problem for the 18-year-old. Suddenly, he couldn’t make a shot in practice or games.

His shooting — along with his poise and defensive intellect — had been a big part of why he broke into Michigan’s starting lineup so early . But after some nice shooting performances early on, he made just one field goal and scored four points in his final five starts.

He finished the season shooting 24 percent from 3-point range.

Even now with his 3-point percentage up to a respectable 35 percent, Brooks swears the issue wasn’t mechanical.

“It was just a mental block,” he said. “Every freshman goes through it at some point and for me unfortunately it happened later in the season.

“It taught he how quickly things can change. Every kid in college was the star in high school. If you’re not performing at the level expected, you won’t play.”

Eventually, Brooks went back and watched film from his high school days. He needed to see his shots going in, and to see what had worked for him.

Really, he just needed to get his confidence back.

He returned to Spring Grove when classes ended in the spring but spent the summer training in Michigan. The 6-foot-1 Brooks spent plenty of time in the weight room — bulking up to 182 pounds after weighing 170 in high school — and traveled with the team to Spain for a tour against international competition.

“It was my first time out of the country,” Brooks said. “We learned a lot and it was a great bonding experience.”

Though he went through personal struggles last season, Brooks absolutely enjoyed the experience of playing major Division I basketball and reaching the national championship game.

There were the obvious moments, like spending Final Four weekend with his family in San Antonio. But Brooks also pointed to the Wolverines’ locker room celebration in the Staples Center in Los Angeles following the Elite Eight and playing at North Carolina’s Dean Smith Center as some of his favorite experiences. Brooks’ father, James, grew up a Tar Heels fan and Eli was born in South Carolina when James was stationed there during his time in the Air Force.

“At first it was frustrating not playing but by the end of the year, I thought, ‘As long as the team wins, I’m OK,’ ” Brooks said. “We had great leaders who kept everything calm. After the Elite Eight, you could feel the energy in the locker room after Coach (John) Beilein came in.”

“Honestly, it felt like we were never going to lose.”

Michigan guard Eli Brooks (55) fights for a rebound with Loyola-Chicago’s Clayton Custer (13) and Ben Richardson (14) during the first half in the semifinals of the Final Four NCAA college basketball tournament, Saturday, March 31, 2018, in San Antonio. (Photo: AP Photo/Eric Gay)

When the Wolverines finally did lose following a 14-game winning streak that stretched from Feb. 11 to March. 31, it came in the national championship game against the team Brooks had grown up rooting for. The Wolverines were able to get some redemption against Villanova with a 73-46 road win over the Wildcats this November.

Of course, Brooks had received an offer from Villanova shortly before he verbally committed to Michigan the summer before his senior year of high school. Wildcats coach Jay Wright even referenced losing out on Brooks during a news conference prior to the national title game last season.

Now a sophomore, Brooks firmly believes he made the right college choice.

“You couldn’t go wrong with either school, but I’m happy to be at Michigan,” he said. “It was definitely very unique playing against them.” 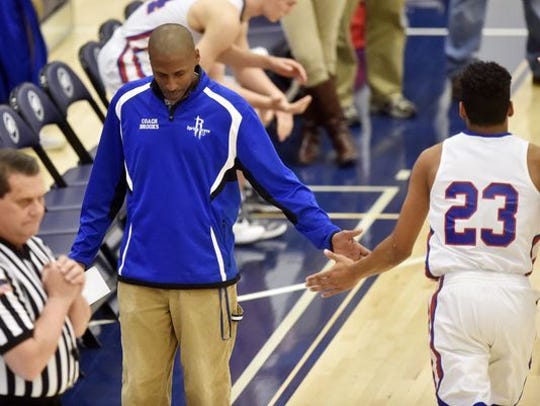 Spring Grove star Eli Brooks was first coached by his dad, James, when he was in kindergarten. The two are shown here before a game in March 2016. (Photo: File, GameTimePA)

Growing up and throughout high school, Brooks didn’t have to go far to find someone to talk basketball with.

His father was his coach. The two were hoops fanatics, and if they weren’t discussing a Spring Grove game, they were either watching a college one or discussing the latest sneaker trends.

Their relationship has developed since Eli left for college.

Namely, it isn’t about basketball anymore.

“Freshman year we didn’t talk about basketball that much,” Eli said. “He was more concerned about me emotionally and that I was making the right decisions.

“In high school, I was closer with my mom off the court. But now it’s equal. I think we grew as people.”

For James, not coaching Eli in AAU helped him adjust to having a different role in his son’s playing career. When he and his wife, Kelly, have met up with Eli after Michigan games they’ve attended, the conversation has been about where to get dinner, not what happened on the court.

When Eli went through his shooting slump last season, James was there to talk if needed. The two continued to have shooting contests when Eli was home in the spring, with the younger Brooks taking two out of three.

Even then, James was more worried about keeping his son in a good place mentally.

“It was really just trying to see if he was OK, if it was his confidence or getting used to a new system,” James Brooks said. “He’s got great coaches and I’m just a parent. I’m more worried about him socially and how he’s doing with his classes. And he’s been doing great.

“He handles things like a grown up and he knows what’s going to be good for him later on. Not just hoops.”

For James, the toughest part about not coaching Eli has been having to stay in his seat at the arena when he’s used to roaming the sidelines.

He admitted it’s still an adjust seeing his son play on national TV.

“I don’t know if I’ll get used to seeing the Brooks name going down the court,” he said. “I don’t do good in the arenas. You get the atmosphere but TV has all the best angles.”

Eli has kept in touch with many of his former Spring Grove teammates including Darin Gordon, Liam Flaherty, Grant Wierman, Jonny Sager and Mason Staub. The rest of the community relies on getting updates from his father.

“I answer more Eli questions than about anything else,” James said. “I’m definitely the go-through to see how the hometown kid is doing. I just say he’s the same as other 19, 20-year-olds complaining about his car not working well and 20-page papers and finals. Except on Saturday he’s playing in front of 17,000 people.”

Like any set of parents would, James and Kelly were thrilled to attend the Final Four last season. Eli got in both games, though he played sparingly.

With the always-tough Big Ten schedule about to heat up, Eli is hoping to contribute to another Michigan title-run this March.

“From where we started last year to the middle of the season and how much we grew,” Eli said, “It really showed what you can do if you have it clicking at the right time.” 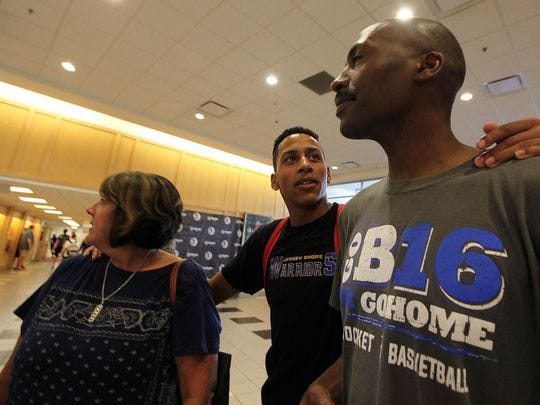 Spring Grove’s Eli Brooks, center, with his parents Kelly, left, and James, right, before before taking the court in the summer of 2016 in front of college coaches and recruiters. (Photo: File, GameTimePA)