Don Brown isn’t being pushed to leave by Jim Harbaugh 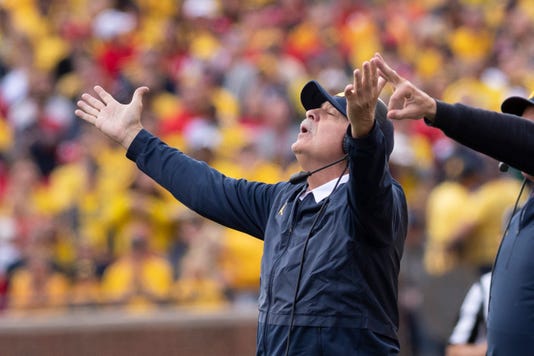 So this is my second attempt at a Michigan mailbag this week because I didn’t realize what poor timing it was to send a request for questions on Wednesday not long after Wolverines fans became aware that defensive coordinator Don Brown had reportedly interviewed for the head coaching position at Temple. About 99.9 percent of the questions were about Brown potentially leaving, but as everyone now knows, he is not heading there, so put away your flasks, and calm your breathing. Let’s get to this!

Question: Don Brown…is he interviewing for HC position just to interview or do you think Michigan will make it hard for him to leave? — @bhymother

Answer: So the mailbag had to include at least ONE, maybe two, Don Brown questions, and I liked Suzanne’s! It’s not wrong to interview for another job, especially a head coaching job. It’s important to see what’s out there. Now, as far as Don Brown is concerned, I don’t give a you know what about his age — he’s 63 (which is WAY older than me, but we’re not talking about me) and way more energized than, say, my colleague Bob Wojnowski (bad example since he’s WAY older than me and Don Brown combined). You get my drift. He can handle a head coaching job, but the question is — would he want to be a head coach again? Been there, done that. It’s a whole other can of craziness. Early in the season he was having a bit of a meltdown because of the way targeting was called and, while he sounded more like he was publicly talking through his issues with officiating and targeting than actually sounding like he might want to ease out of coaching as a result, the point is there is so much more to being a head coach than being a position coach or coordinator. Look at the luxury he has at Michigan. Jim Harbaugh isn’t sticking his nose in the defensive meetings or questioning much, and he just gave Brown the top coach of the year award last Sunday. So will Michigan make it hard to leave? Yes. Look, everyone knows what happened in the regular-season finale against Ohio State and if Don Brown thought about the 2017 Penn State game every time he woke up, I think it’s a safe bet he’s having nightmares about the Buckeyes’ touchdown bonanza. He is much loved by the players and his coaches — heck, even Pep Hamilton was wearing a piece of his tape across his chest OSU week saying vote Brown for the Broyles — and Michigan has been No. 1 in defense two of the last three years and the Wolverines were No. 3 last season. He makes $1 million a year but athletic director Warde Manuel will sweeten the deal. He wants Harbaugh to finish his coaching career at Michigan and bets are on he wants Brown to finish his career with the Wolverines, as well.

Question: Why doesn’t JH put out a statement every thanksgiving proclaiming he’s not going to the nfl? Do you think Jim Harbaugh’s refusal to comment on rumors of him leaving contributed to D Hill flipping? — @PelhamOneTwo3

Answer: It’s a good question, but it’s really not Harbaugh’s style, and as I type this, I’m not even sure what that means because I don’t know what his “style” really is. This might sound odd considering all of the attention he received the first few years at Michigan climbing trees and sleeping over at recruits’ homes, etc, etc., since there are too many “unique” Harbaughisms to type right now, but he really doesn’t seem to enjoy talking about himself. Rarely. Ever. Which is a shame, but that’s for another mailbag. So for him to be pro-active and make a statement just to make a statement doesn’t sound like Harbaugh to me. Now, could he have responded faster? Sure. One thing I’ve missed is Harbaugh’s use of Twitter to answer “jive turkeys” as he called them a few years ago. He is masterful at the sub-tweet, but where has that been? Wouldn’t this have been a perfect time to come out swinging with words? Instead he eventually made a comment Sunday to Adam Schefter and then got irritated when local beat writers simply wanted to follow up (again, that’s for another mailbag). Let’s be clear — no one around here has been banging the Harbaugh-is-going-back-to-the-NFL drum, so excuuuuuuuuuuse us if any of the beat writers ask further questions about the topic. Oops. Sounds like I sent myself a mailbag question. Think it’s time to get off my soapbox.

Question: Why do so many of the coaches and players celebrate 2nd place? — @rodneymark15

Answer: Are they, Rodney? Like Ricky Bobby said — if you ain’t first, you’re last. Technically, that’s hard to argue. Ha! I don’t think they’re celebrating second place, but you know athletes — and we can paint with a broader stroke and include anyone here who is in a competitive environment whether it’s school or work or sports — have to reset and think about the positives if they’re going to be able to move forward and continue to achieve. Tiger Woods to me is a prime example. How many times during his later-career struggles has he accentuated the positives in a round that might have been dominated by bogeys and poor shot-making? He singles out the great 20-foot putt he made or the chip shot that mere mortals can’t make that put him in birdie range. So celebrating second place? I don’t think so. And if you’re referencing the comment about a banner for a co-division title, OK, no. That shouldn’t happen. If there’s some perception they’re celebrating, I don’t see it. What I see is a team trying to remind itself it won 10 straight and can get to 11 wins and the only way to get to that goal is to remain positive and think about that 20-foot birdie putt.

Question: Will Harbaugh either change the offense or hire a new OC that he (will) let have free reign? — @bshelton77

Answer: Brian, he’s not going to overhaul his offense, and he shouldn’t. BUT — and I say BUT because this has been bugging me since the summer — HE NEEDS AN OFFENSIVE COORDINATOR. I get, and always have, his “collaborative” approach. My approach is simpler — hire an offensive coordinator. I keep saying someone like Jedd Fisch, who was on staff previously under Harbaugh as pass-game coordinator, would be ideal. And maybe I’m reading into something (people say women read too much into everything and I say “whatever” to that on behalf of all women!) here, but it seemed curious to me that there’s a BNEFC coaching clinic with high school, college and NFL coaches in March and the registration flyer features Don Brown and Fisch, currently with the Rams. Maybe it’s coincidence, but … just sayin’ (for the record, at least one person out there knows I detest the use of “just sayin” but it seemed to fit here).

Question: OK, I have one. Now that there has been time to do a postmortem on the Ohio State game: Why did it seem like Michigan players were in a different game than the Buckeyes? — @MaltoMarko

Answer: Mark, I don’t think it’s about being in a different game or even a different mindset. They wanted to win this game. They felt confident. They believed. But it can’t be ignored that Urban Meyer has been recruiting incredibly well at Ohio State and inherited a group that wasn’t far off. I think Jim Harbaugh has had a tougher path. Now, that’s not an excuse. Not at all. After all, I had Michigan winning by 10.

Question: What happened bet Harbaugh and brown after the 62 point game? Did Harbaugh encourage DB to pursue other jobs? — @harbaughsolidier

Answer: Nope, I don’t think that at all. Not the way Harbaugh has praised Don Brown all season and then awarded him last Sunday with the award for top coach on staff. I really think Brown wanted to go through the process and see what was out there — who wouldn’t really, in any job? If the byproduct is more money from Michigan, well, then, more power to him.

Question: With early signing day approaching Dec. 19 what are the projections for the top remaining non-committed recruits that Michigan is targeting? — @Donamore19

Answer: Don — so I should type away here, but I will direct you to my podcast that posted Thursday on detroitnews.com because Allen Trieu joined me and shared so much information about Michigan’s recruiting.

Question: Why are you using performance enhancing drugs? How long have you used them? Can we expect an act of contrition and a press conference soon? — @BenSzilagy

Answer: Ben, I know you’re referencing the photo of the two needles I posted Thursday on Twitter. Those were not performance enhancing. No, no, no. Not me. I mean, yes, my tennis career is really on the upswing and I need my knee to work better, preferably without pain, but my performance doesn’t need banned substances! But let me get this statement out right now – I have never used performance enhancing drugs, and I’m not leaving to cover the NFL. There. Now stop asking me. I’m sticking around on the courts and will be playing in a USTA match near you!