College basketball: The toughest tests for the 4 unbeaten teams

Four perfect records, spread over four conferences and three time zones. What peril is dead ahead for them?

The Wolverines became impossible not to notice — or keep out of the top 10 — when they shredded three ranked opponents. That’d be Villanova by 27 points, North Carolina by 17 and Purdue by 19. It’s only the third 13-0 start in school history, and they’ve been playing basketball at Michigan for 103 years.

A basic truth since James Naismith nailed up his peach basket: If the opponents can’t score, you don’t lose much. Michigan is allowing 55.1 points a game, third lowest in the nation. The Wolverines are also second in fewest fouls per game and sixth in fewest turnovers.

Indiana pays an intriguing call to Ann Arbor Jan. 6. The 11-2 Hoosiers have won six in a row, are second in the nation with their 52.9 shooting, and Juwan Morgan is coming off only the second triple double in school history, while making 22 of 25 shots in the past three games. That ought to get the Michigan defense’s attention.

MORE: The best feel-good stories in college sports from 2018

But the Wolverines have won 27 of their last 28 home games, so there’s that. A truly foreboding stretch will be Jan. 19 at Wisconsin and Jan. 25 at Indiana — two of the toughest places to visit in the Big Ten. Beat the Badgers’ Ethan Happ on his own court, and then try to stop the Hoosiers’ offense in Bloomington. That’ll be a dangerous week. Besides, Wisconsin is an old hand at ruining perfect records. Ask Kentucky about the 2015 Final Four.

John Beilein had a team in the national championship game in 2013, and again last April. Both were losses, with anguish in the end, instead of one shining moment. He wouldn’t mind finding out if the third time is really the charm, and if Michigan can be the team to finally end the 18-year Big Ten title drought.

It’s the usual Tony Bennett concoction of tempo control, defense and efficiency. Virginia began play Monday leading the nation in scoring defense, 3-point defense, fewest turnovers and assist-turnover ratio. Throw out the 71 points Maryland somehow managed and the Cavaliers are allowing only 49 a game. They’re also averaging one turnover every five minutes or so. And they make the most of what offense they get. When a Bennett team scores 70 points, it is 115-6.

Non-conference fun time is over. The Cavaliers face a brutal opening stretch in ACC play — Florida State at home, Boston College and Clemson on the road, Virginia Tech at home, a trip to Duke. Fifteen days, five teams who took a combined record of 52-9 into 2019 — three of them ranked in the top-10. Yikes.

ALSO: 27 reasons why the ACC is so good as conference play begins

That starts with Florida State Jan. 5, and the Seminoles’ 11-1 record is fair warning. Then again, Virginia is 49-5 at home in ACC games the past six years. The Jan. 19 game in Durham looks like a real stopper, but know this: Virginia won in Durham last year 65-63, and its past four appearances at Duke were decided by a combined margin of 10 points. The Cavaliers have been a tough out in Cameron Indoor Stadium.

The Cavaliers are 20-1 going back to last February. The loss might ring a bell. UMBC, first round, No. 1 seed vs. No. 16. You know the rest. Only a magical season, and maybe the first Final Four trip in 25 years, would make them forget that. 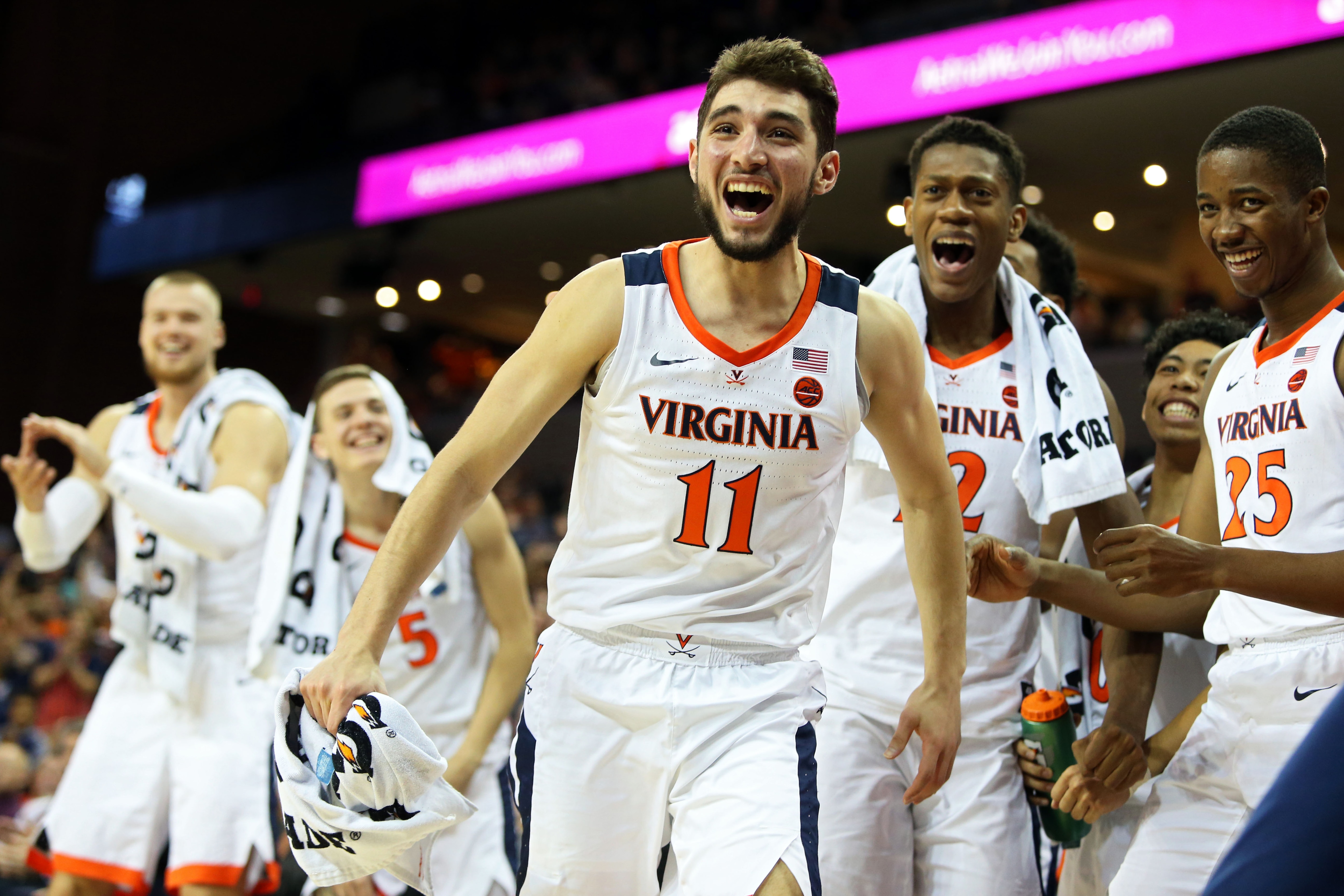 An undefeated season would be one antidote to help Virginia forget about its loss to UMBC last March.

Look what experience gets you. The Wolf Pack starts five red-shirt seniors, and the top reserve is a fourth-year junior. No wonder nothing much fazes them. Not being down 15 to Arizona State and 12 to Grand Canyon, nor a six-game road swing that included 5,875 miles, nine flights and stops in four states, nor shattering precedent in their program. Here they are, 13-0, for the best start in the school’s 50-year Division I history.

An example of how times have changed. Nevada was 0-10 all-time against Utah until the other day, when the Wolf Pack barged into Salt Lake City, and won by 15 points.

Maybe a better question is, will it? Nevada is predicted to blow through the Mountain West Conference. The team that finished second in the preseason poll, San Diego State, just lost by 21 points to Brown, at home. Clearly, Nevada is the likeliest of the four remaining unbeatens to run the table.

Still, the Utah State visit to Reno Wednesday will not be easy, even if Nevada has won 38 of its past 40 home games. Utah State is 10-3 and has held 11 of 13 opponents under 40 percent shooting, while building up an 11.7 rebound margin. The Aggies also got something of a dress rehearsal in facing an unbeaten host at Houston before Christmas. They lost by 10 points, but bothered the Cougars into 31.7 percent shooting.

As we get ready to head into 2019, take a look back at some of our favorite moments from 2018! pic.twitter.com/1d1Ti9IpTG

Jan. 12 is a possible risky day for Nevada, with a trip to 9-3 Fresno State. The Bulldogs whipped Northwestern by 19 points, and have won 21 of their last 26 Mountain West games at home.

All those seniors understand the time is now for Nevada. The Wolf Pack got a serious taste of March with a Sweet 16 trip in 2018, but then were added to Loyola Chicago’s victims list. They wish for the Final Four adulation that was poured upon Loyola last spring, even if they don’t have a famous team nun.

The Houston football team gave up 70 points to Army in its bowl game. Only one of 13 opponents have scored that many against the Cougars basketball team. The defense that has allowed only 35.8 percent shooting — third best in the nation — is a big reason Houston is 13-0 for the first time since the golden Elvin Hayes era in the late 1960s.

The Cougars own the nation’s longest home-court winning streak at 26 games, which would suggest any first loss should come on the road. Then again, there have been enough close calls in Houston — four wins by six or fewer points — to believe it is not impossible. First up is Wednesday’s visit from 10-3 Tulsa, who earlier upset then-ranked Kansas State.

Probably even more hazardous is a Jan. 9 trip to 10-2 Temple.  The Owls have taken down at least one ranked opponent 11 years in a row. On paper, the toughest league dates for Houston — conference favorite UCF and Cincinnati — aren’t until February.

The only programs to go to three consecutive Final Fours in the past half century are bluebloods Kentucky, Duke, North Carolina, UCLA, Michigan State. Oh, and also Houston. The Cougars did it in 1982-84 during the Guy Lewis glory days, then sank into the dark ages. They didn’t win another NCAA Tournament game for 34 years, until last year’s first-rounder over San Diego State. The Cougars seek to make March great again.

Hard to believe all this happened in 2018…

And they know what heartache feels like. They’ve won 19 of their last 21 games going back to last season. The defeats were by one point to Cincinnati in the conference championship game and one point to Michigan in the second round of the NCAA tournament.

But right now, they can share this New Year’s message with their colleagues from Virginia to Michigan to Nevada. Being unbeaten ain’t bad.