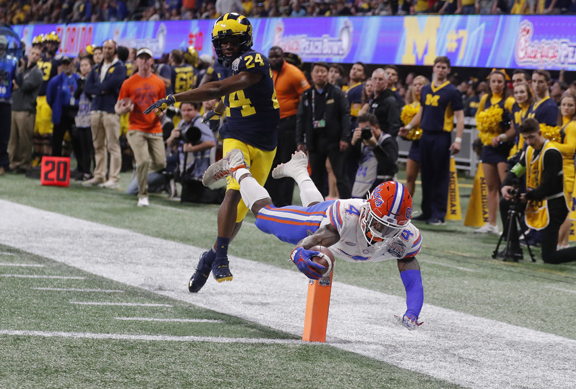 Florida running back Kadarius Toney, right, leaps for the end zone against Michigan defensive back Lavert Hill during the Peach Bowl on Saturday in Atlanta. (AP photo)

ANN ARBOR — Jim Harbaugh shook up his coaching staff nearly a year ago as he entered his fourth season at Michigan. For a while, the moves looked good.

The Wolverines won 10 straight games after opening the season with a seven-point loss at Notre Dame, raising hopes they may win the Big Ten title for the first time since 2004 and perhaps even more. They dashed those hopes with a pair of humiliating losses: 41-15 against No. 10 Florida in the Peach Bowl as the eighth-ranked team in the country on Saturday and 62-39 at Ohio State last month.

“On those days, we were beaten by better teams,” Harbaugh told reporters in Atlanta. “So we have to persevere, be persistent, keep working, and put it over the top.”

Harbaugh said he doesn’t anticipate making changes again with his assistants this offseason.

Michigan will return most of its starters on offense, which struggled to move the ball on the ground against the Gators without running back Karan Higdon and tackle Juwann Bushell-Beatty. Quarterback Shea Patterson said he’ll be back for his senior season, but he may have competition from Dylan McCaffrey and Joe Milton.